Use your sword to fight monsters and defeat the Dragon. Collect gold to upgrade your boots, shield and armour, and defeat bosses to strengthen your sword. Most stages include a boss, that once defeated leaves behind a key to the next stage.

A bootleg of this game was made by Galaxy Electronics in England.

This game has hidden coins that appear when you jump in certain spots. The demo screen shows a couple of these. Some of them will give you 60 gold or more every time.

Besides the general strategy of quickly wiggling the joystick right and left while jumping (which raises the chance to get 60+ golds), certain coins, in certain places within the game, will ALWAYS yield 60+ golds if you perform particular actions : 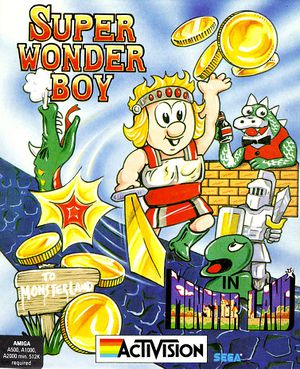 Box art for the Activision port of Wonder Boy in Monster Land.