An horizontal monitor is split into three sections, one for each of up to three people. Players wander around a space station shooting as many Ridley Scott-esque aliens as they can before health or time runs out- then it's off to the next space station. There are multiple weapon types, including a duck gun!

The word 'Xenophobe' (pronounced 'Zee-no-phobe') is a psychiatric term meaning 'fear of aliens'.

Xenophobe was a highly original game with a highly original concept. It was the first split-screen game. It was also a victim of a production scheduling snafu. Due to its production being pushed ahead, a lot of the game's tuning was axed. There are many objects in the game that the player can pick up, but have no use. 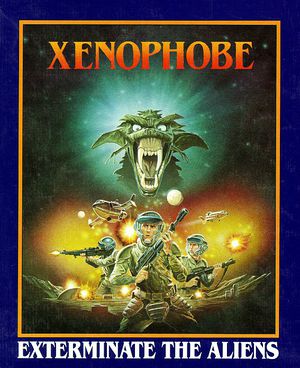 Box art for the Micro Style port of Xenophobe.