The goddess Athena has been abducted by the Lord of the Underworld. Her father, the great god Zeus, searched for a brave warrior strong enough to save her. He chose a brave warrior who died with honour & courage on the battlefield. Zeus raised the warrior from the grave and granted him the power to morph into a powerful, holy beast in order to do battle against the unspeakable horrors of the Underworld.

Altered Beast is a 2-player horizontally scrolling beat-em-up. The game begins with the player controlling the human form of the resurrected warrior. During the levels the warrior will be attacked by a number of flashing animals. Destroying these creatures will result in an orb being dropped. If the player picks up an orb, he will begin his transformation from human into 'Beast'. Once 3 orbs have been collected, the transformation is complete. In beast form the player's character is much faster and stronger than in the human form, and also has the ability to throw fireballs at the enemy. At the end of each stage, after the boss fight, the player's special powers are taken from him and he once again reverts to human form.

The action in Altered Beast veers from being untypically slow-paced and sedate for a game of this nature, but the game's premise and graphical flair helped to seperate it from other rivals of the genre.

This game is known in Japan as "Juuohki".

Altered Beast was moderately successful, the player's ability to transform into different creatures being a big draw.

The small tail swinging gryphon that appears often in this game makes a comeback in "Golden Axe".

An Altered Beast unit appears in 1998 movie 'The Replacement Killers'.

The American release of the Sega Genesis (Mega Drive) in 1989 all came bundled with a port of this game, making it the first American Genesis game.

You also get points for clearing an area. These bonuses range from 20000 points to 100000 points depending on how fast you cleared the level and enemies killed.

You start off in a graveyard on this level. You will immediately be assaulted by zombies and headless skeletons. Watch out for the tall, granite blocks since they usually release one of these enemies.

A pretty easy boss. It takes about 15 hits to put him down. This boss will throw five to seven heads at your location. The best way to counter this threat is to stay in one place and go into the gaps between the heads. When the heads quit falling, hit the boss a couple of times and repeat the above process.

You will be going through the swamps on this level.

The boss transforms into a giant plant with eyes. He will launch ten eyes, which will slowly drift toward your character. You must destroy all of these eyes to get to the boss himself. In order to score hits, you must hit the central eye. You have to be quick since this boss will put up another wall of eyes to block your attacks. It takes about 20 hits to eradicate this plant.Just Stay in line with the main eye and keep fireing without moving. If eyes get near you use the kick button to send out a shock wave.

You are now entering the caves. The biggest danger is all the crevices. Make sure you keep to the ledges and avoid falling or getting knocked off of them.

A good tactic for all the enemies is to let them follow you. Then jump over a crevice and they will fall in.

This Boss is fairly easy with a little practice. Get Close to him and keep shooting your death breath. When the spinning ice and fire come out jump towards the boss right before they hit you. Then continue to fire death breath and repeat.

You have entered what appears to be a city.

You have already dealt with most of these enemies. Just use the tactics you used from the first level to take care of them.

The flying demons present a moderate threat. They will dive down on your character when you are stopped. The best way to deal with them is to entice them to attack then hit them when they are rising up again.

Another rough boss battle. This time he takes the form of a blue dragon's head. You must hit this boss from underneath to affect him. He moves in a slow circle so time your jumps accordingly. He spits out a solid stream of fireballs. You can duck under most of them. For the ones you can't, just jump toward the boss. In addition to fireballs, he also launches one or two small red dragons to further harass your character. These can be taken out with normal attacks. After 30 hits, you can send this boss packing.

The final level, you will be located in some ruins. You will encounter some pretty vicious enemies on this level. They each have strengths to their credit.

All these enemies work in tandem to wear your character down quickly and they tend to appear in mixed groups so you will have to do a lot of hitting and running to survive them.

Note: Make sure you get the first 3 power ups or this will be a very hard level.

The final boss and appropriately the toughest boss. The boss appears as a large warrior in the shape of a rhino. He has two attacks : The first one is basically going toe-to-toe with your character and beating the stuffing out of him. The second is a charge. The charge will be proceeded by steam coming out of the rhino's nostrils.

You will have to constantly move around to avoid this bosses attacks. You can defuse the charge and send this boss backwards by hitting him as he is charging.

The boss starts out as a gray color. He will turn red after about 30 hits. He will then turn purple after another 30 hits. 30 more hits and you have accomplished your goal.

When he appears go to the extreme left of the screen. When he charges jump high and bound of his head to the right of him. Then run all the way right and jump angain when he charges bouncing off his head to the left. When you land use the rush attack and run to the left of the screen. If after you use the rush attack he punches you will have time throw 1 or 2 fire balls. This will take some practice but is very effective.

Congratulations, you are now a God. 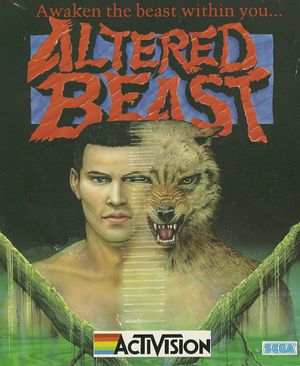 Box art for the Activision port of Altered Beast.