After a sudden alien assault, the Arkanoid spaceship has been destroyed and the only survivor, the small 'Vaus' space vessel, has been mysteriously trapped in another dimension by an unknown enemy. The player is charged with helping the 'Vaus' overcome the security systems, as well as the many enemies that guard them, before finally finding and destroying 'DOH', the alien responsible for the attack.

Arkanoid is an update of the early ball and paddle video games - and specifically of Atari's 1978 classic, "Super Breakout" - in which the player takes control of a paddle at the bottom of the screen and must use it to deflect a ball into rows of bricks at the top of the screen, thus destroying them and, eventually, clearing the screen to progress to the next level.

As well as impressive and colourful graphics, Arkanoid introduced a number of new elements to the classic bat 'n' ball gameplay. Certain bricks, when destroyed, would release a power-up - in the form of a falling capsule. the player had to catch the capsule to retrieve the power-up. Among the many enhancements the power-ups provided were an increased 'bat' size, multiple balls, 'sticky' ball (which would stick to the bat and could be released when the player chose) and even a laser, which allowed the player to shoot the bricks.

Arkanoid has remained a popular game and is commonly cloned by aspiring game developers in freeware and shareware titles. Many companies have also regularly cloned the game in arcades.

Arkanoid's popularity led to it being featured in "Rainbow Islands - The Story of Bubble Bobble 2", which has a whole level (4 stages in all) dedicated to the game, including DOH as the level boss.

Nick Mollison holds the official record for this game on extremely hard settings with 1,156,930 points on September 7, 2008.

2 bootlegs of this game are known as "Block" and "Paddle 2". There is a hack made by Two-Bits score known as "Arkanoid Plus".

The Japanese version supports cocktail mode whereas the others don't.

Points are scored for destroying bricks and killings aliens. 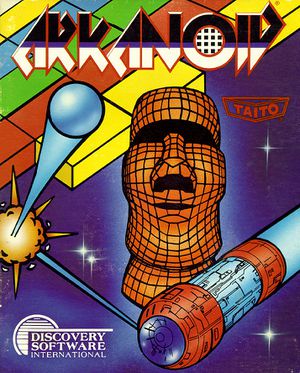 Box art for the Discovery Software International port of Arkanoid. 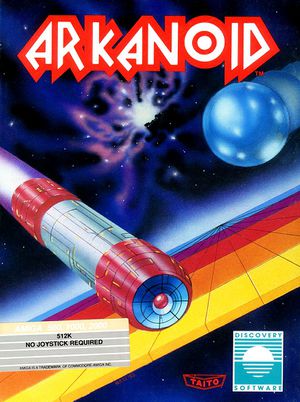