Lost In Translation/Rainbow Islands - The Story of Bubble Bobble 2

Rainbow Islands - The Story of Bubble Bobble 2 is an arcade video platform game sequel to the legendary "Bubble Bobble" - released a year earlier - and has attained the same legendary status as that of its illustrious predecessor.

1 or 2 players (who, unlike 'Bubble Bobble', no longer play simultaneously) take on the role of Bub and Bob who, after their success in Bubble Bobble, have now been returned to their original human form. The heroes have been asked to rescue the Rainbow Islands from the clutches of the various enemies who have overrun the islands. Bob and Bob are each armed with the ability to create rainbows; an ingenious game-play device that acts as both a weapon (to either kill an enemy instantly, or an enemy then collapse the rainbow onto it, this is essential for collecting bonus gems, (see 'Tips and Tricks' for details) and as a platform that allows the players to reach previously inaccessible parts of the level as they race to reach the top of the island before the game's tight time limit expires.

A number of power-ups are available to the players; including multiple rainbows (up to a maximum of three), faster generating rainbows, speed-up shoes and temporary invulnerability. Rainbow Islands is famous for its multitude of hidden secrets, see 'Tips and Tricks' for details.

Rainbow Islands consists of 7 levels, each with 4 rounds. Holding down the jump button will allow the player to jump onto rainbows without crushing them.

The main characters are Bub and Bob, the protagonists of "Bubble Bobble". However, in this game they appear in human forms, as opposed to the dinosaurs of the first game. In single-player mode, only Bub is present.

The fifth island, DOH Island, is a homage to the game "Arkanoid", also by Taito. This level plays as any other, but the enemies are the same as encountered in "Arkanoid", and the platforms are designed from coloured blocks. Also, the music is absent and the player's jumping sound resembles the sound of the ball hitting the bat in "Arkanoid". Losing the final life in this island also results in the Game Over music from "Arkanoid" instead of the usual Rainbow Islands music. The boss on DOH Island is DOH himself, the boss of "Arkanoid".

The game soundtrack features a brief excerpt from 'Over the Rainbow', which has meant that later ports of the game have different music, as the license expired some time ago.

An extra version of this game was released in 1988 (Game ID : B39, see Updates section for more info).

A bootleg of this game called "Jumping" was released in 1989.

The extra version has the exact same game-play as the original but the stages and bosses appear in a different order.

One of Rainbow Island's most infamous and difficult-to-achieve bonuses is that of collecting one of each of the coloured gems (red, orange, yellow, green, light blue, dark blue and mauve). Gems are awarded when a player collapses a rainbow onto certain enemies and the colour of the gem awarded is dictated by WHERE on the screen the enemy is when it's killed. The screen is split into several invisible vertical 'bands' of colour; when a gem falls, its colour is determined by the 'colour' of the area into which it fell. Now all you have to do is gauge carefully where the dead enemy will fall to create the gem colour of your choice.

These codes can be typed in at the title screen (while the rainbow is cycling through its colours). They are given to you in the secret rooms and give you the effect of the item in that room if you use them. When you put your coin in, an item should appear in the bottom left corner, depending on which cheat you used. This not only awards you the life and Bonus Gem, it also grants you access to a magical secret room. When you reach the end of the level, a silver door appears. You DON'T have to fight the Boss.

Make sure the second to last 2 digits of your score are the same when you reach 'goal in', this will make the chest contain a better bonus item (eg. : reach goal in with a score of xxxx11x). 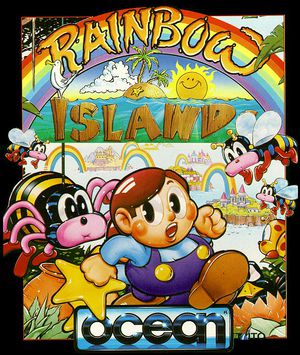 Box art for the Ocean port of Rainbow Islands.