Bubble Bobble is a 1 or 2 player game, where the players take on the role of Bub and Bob, 2 cute dinosaurs who must battle through 100 platform-packed levels and rescue their girlfriends. Bub and Bob are armed only with the ability to make bubbles, in which the game's many enemies can be trapped and killed. The bubbles can also be used as temporary platforms, to help the dinosaurs reach previously inaccessible areas of a level.

The game's simple-yet-involving game-play saw Bubble Bobble become an instant classic. Its 2-player co-operative mode, coupled with the incredible amount of hidden secrets and potential for strategic play - unheard of in the platform genre - would set the standard by which all other platform games were judged.

Licensed to Romstar for US manufacture and distribution (October 1986).

This was one of the first games to feature multiple endings.

The title of this game, Bubble Bobble, is a cross between the words 'bubble' and the name of the heroes : Bub and Bob.

The enemies are named (Round number of initial appearance applies to 'Normal' mode. For information on 'Super' mode, see Updates below) :

In 1996, Taito announced that they lost the original source code program to Bubble Bobble following a reorganization - when it came to the recent ports and sequels, they had to work from program disassembly, playing the game and (mainly) the various home computer ports.

The game forbids the initials 'SEX' on the high score table. If you try, it gets changed to 'H.!', but go to the Tips and Tricks section for more information about 'SEX' :-)

Points double for each extra monster killed at any one time.

Bubble Bobble is a game heavily relying on game-play and precise technique rather than graphics, and it features a series of special techniques and tricks a player can perform to maximize his or her score, make some rounds of the game easier or faster to finish or just to be able to survive or even finish a round. Some of these techniques have special nicknames, which may differ from player to player and from country to country.

Or just kissing means killing a monster by blowing a bubble at almost contact distance : the monster will be instantly bubbled and the bubble will be instantly popped, giving the visual effect of the player killing a monster with a 'kiss'. Some players flip their joysticks in the opposite direction after pressing the bubble buttons, giving more chances of an 'instant pop' and changing flight direction for the dead monster. This technique is useful in stages where monsters move too fast, bubbles last for too short of a time or it's otherwise hard to bubble them normally. Of course good timing is required for this technique to work.

Means keeping the jump button pressed when dropping on a bubble: if done correctly, instead of popping the bubble, your dragon will instead jump on it, possibly continuously, enabling him to 'ride' bubbles in order to reach otherwise unreachable areas. Some stages can't be finished without this technique.

Is a step up from riding bubbles. It means standing at half a bubble distance from a wall, jumping and blowing a bubble almost simultaneously, jumping up from that bubble and blowing another bubble and so on. This is necessary if the air current pushes down bubbles but you need to climb up. Having the rapid-bubbling power-up (the yellow candy) makes climbing a lot easier, especially if you got the running shoes already.

Means 'riding a bubble' through the opening at the top of a stage or even just through the ceiling of a stage in order to appear at the lower part, like some flying monsters can do. This technique is required to finish some stages or to get unstuck from some places, or just to save time.

Blowing Against The Wall

Means blowing bubbles against wall at contact distance : the bubbles will pop immediately thus giving the player 10 points per bubble pop. This can be used to either increase a player's score, or to set a player's score to a specific amount, in order to do other tricks.

Means using the 'blowing against the wall' technique or other score-adjusting techniques in order to make the two penultimate (100s and 10s places) digits of at least one player equal, e.g., 456770, before the last enemy bubble is burst. If done correctly and the score is not modified when this occurs, then all remaining non-special bubbles on screen will be turned to 700-point bonuses, whose appearance depends on the digit picked. E.g., 7 gives Chocolate Ice Creams, 3 gives Hamburgers, and so on.

Note : this trick is easier to do with two players (one player adjusts his score and the other bursts the bubbles), but it can also be done with only one player, although calculating exactly how much (and if) one's score will be modified when bursting the last enemy bubbles can be extremely complex, if not unpredictable, especially if there are very large and clustered bubble bunches.

Note : Rounds with numbers ending with 5 and 0 up to and including level 50 generate bonuses from bubbles automatically, though, and some rounds (including round 1) do it by default.

An interesting (and exploitable) part of bubble bobble is that powerups are not entirely random. As with the two digit trick, many internal counters in this game decide which special powers are available for collection. For example, rapid bubble shooting (a sweet in yellow wrapping), fast moving bubbles (a blue sweet), or fast moving bubbles (a blue sweet) appear shortly after either Bub or Bob jumps 51 times, pops 51 bubbles, or blows 51 bubbles. Also, running around a lot causes the speed powerup (red shoe) to appear. Keeping this is mind, it is possible to gain all powerups with relative ease. Although there are many more counters that control various aspects of the game, one of particular interest is the letters forming the word EXTEND. Getting all 7 letters will end the current level and award the player with an extra life 'NICE 1P!' - these letters have a greater chance of appearing when more enemies are defeated simultaneously. Also, gathering three of the same letter causes candy canes to appear which in turn lead to a special big item at the end of the level!

At the main title screen, press Left, Jump, Left, 1P, Left, Fire, Left, 1P. If this is done correctly there will be a message in the bottom left corner of the title screen a red POWER UP!.

This will change the Bubble Bobble logo in 'Super Bubble bobble' and the game will change under several points of view : different platform colors, different order for monster appearances (See 'Updates' above)... The code that must be entered at the title screen to access Super Bubble Bobble is displayed at the end of the credits after you beat the game in 2 players, normal mode. The message is coded, but it hints you to enter the secret room in level 20 to get the key for decoding. If you do so, you enter the secret room, on the base of which there is an inscription. The first line is the coding of the alphabet, the other lines are coded advices to beat the final boss. The decoded 'secret message' is : SJBLRJSR (Start - Jump - Bubble - Left - Right - Jump - Start - Right)

A little more trivia on Super Bubble Bobble : if you beat the game in Super mode, two players, you will discover that the final boss is your mother and father that were controlled by some unknown evil. By defeating the boss you free them and your girlfriends, and are reverted back to your original human form (the one you play "Rainbow Island" with...)

Skel, also known as 'Baron Von Blubba', is that nasty white monster that comes after you when you've taken too long; with two players, two Skels will appear. If one player is killed by HIS Skel, then he can collide with his partner's Skel 'WHILE HE IS STILL FLICKERING'. If the player's icon is still flickering, the other player's Skel will disappear (poof!), with no harm to the once-slain character.

Beat the game in 2 Player in Super mode and you'll get the full end sequence.

After getting a high score, enter your initials as : 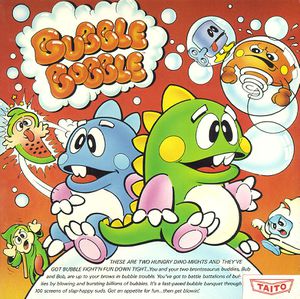 Box art(?) for the Firebird port of Bubble Bobble.