Bad Lands is set 50 years after a nuclear disaster. The sport of sprint racing is now a ruthless battle between armed cars. These races take place on tracks built in the ruins of the dangerous nuclear zone known only as the BADLANDS. It's all-out war on the track as players blast away at the drones (and each other) to finish first. Players shoot play-field targets for extra points and bonus missiles.

Bonus wrenches appear at regular intervals which can be collected and used to upgrade the player's vehicle. The available upgrades are : missiles, tires, turbo, increased speed, and shields. This was to be Atari's last game in the 'Sprint' series.

Unlike its 2 most famous prequels, "Championship Sprint" and "Super Sprint", Bad Lands used a standard resolution monitor instead of the medium resolution monitor used in the past. This means the cars are somewhat larger and, because of this scale issue, the tracks feel smaller and more cramped than in other games in the series. As a result of this, only 3 cars compete, instead of the 4 vehicles that appeared in earlier games.

Bad Lands re-uses some of the sounds from Championship Sprint and Super Sprint, particularly notable when bonus wrenches are collected. 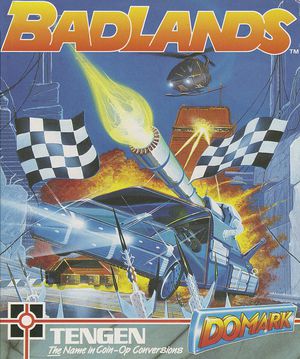 Box art for the DoMark port of Bad Lands.