Bionic Commando has the player take on the role of 'Super Joe', an elite Commando who is equipped with a bionic arm; an ingenious device that acts as an advanced grappling hook and must be used to traverse the many platforms and ledges that make up the game's levels. The arm can also be used to destroy the enemies that populate the levels, as well as to retrieve bonuses and weapons that are occasionally dropped by parachute.

This game is known in Japan as "Top Secret".

Many Capcom employees consider this to be one of the most difficult games Capcom ever released in arcades.

There are several songs available in the test mode that are not used in the actual game. The game's main character, 'Super Joe', made his first appearance in the 1985 game, "Commando". 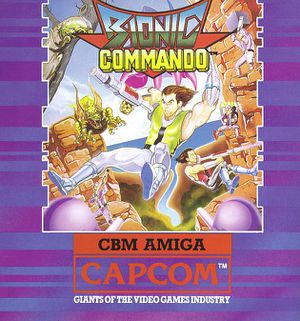