Commando is a vertically scrolling, arcade video game shoot-em-up in which the player takes on the role of a highly trained commando soldier. The mission is to rescue captives and destroy enemy bases and strongholds, killing as many enemy soldiers as possible in the process. The commando carries only 2 weapons : a limited-range machine gun with unlimited shots, and a limited supply of hand grenades. Extra grenades can be picked up as the player progresses through the levels.

This game is known in Japan as "Senjou no Ookami" (translates as 'Battlefield of the Wolf') and is known as "Space Invasion" for the West German marketplace.

The main character is Super Joe from "Bionic Commando" and "The Speed Rumbler".

Bandai released a boardgame based on this video game (same name) : A simple roll-and-move type game, with symbols on the board indicating what happens when you land on that spot. There are multiple choices on which direction to go, but not too much in the way of required thinking. There are many different boards that you progress through, each 'board' representing one 'stage' of the game. 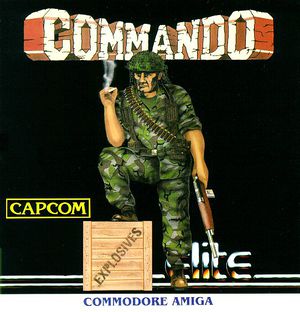