Mercs is an arcade video game.

The US faces a grave crisis! The former president has been kidnapped by a group of revolutionaries while on a trip on Central Africa meant to promote world peace. Take control of three highly skilled anti-terrorist soldiers and venture through enemy lines to save the former president & annihilate the rebel army in the process. Features solid graphics & sound, plenty of weapons & vehicles to use and hulking bosses to defeat.

This game is known in Japan as "Senjou no Ookami II" (translates as 'Wolf of the Battlefield II').

US versions are slightly different, they have the "Winners Don't Use Drugs" screen.

At the end of stage 1, a large plane rises in front of the player. If you stand .25 to .5 inches up from the bottom of the cliff, and line up so your bullets will hit just to the right of the plane's center, it cannot hit you with its cannon. This takes practice. 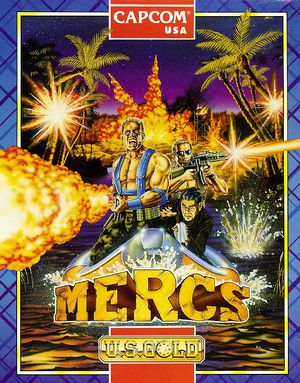 Box art for the U.S. Gold port of Mercs.