Crack Down is an arcade video game.

A futuristic city has been over-taken by a powerful, bio-mechanical army; created by an evil scientist in a bid to take over the world. 2 elite agents must plant a series of time bombs to destroy their base and crush the rebellion.

The 1- or 2-player shoot-em-up action is displayed via an innovative split screen that allows 2 players to work either individually or as a team. A timer countdown timers ands to the tension. Time bombs must be set by running over areas marked with an 'X'; while machine guns and cannons can be reloaded by finding the ammo caches that appear on each level. If ammo runs out, players must result to punching and kicking to defeat opponents.

There is a reference to the arcade game "Shinobi" : the 'Hiyaaa' sound that Ben and Andy exclaim after detonating a superbomb is the same sound as the Shinobi ninja magic sound. Also, 2 of the 4 superbombs also appear in Shinobi. Look closely, the eletricity bomb and the whirlwind with homing sickles bomb are here too.

At the end of scene 2 act. 2. There is a machine that produces electrical sparks. On top of the machine can be read : 's-4635 system24'. This is a reference to the arcade board this game runs on. 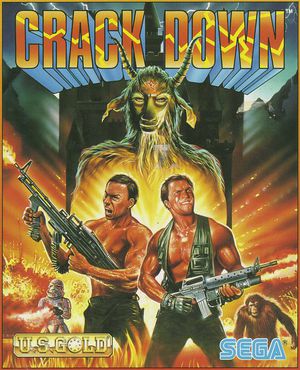 Box art for the U.S. Gold port of Crack Down.