A superb and innovative game from the same gaming stable that gave the world "R-Type", Irem. Dragon Breed differs from other shoot-em-ups through its interpretation of the 'ship' that appears in other games of the genre; in Dragon Breed, the player controls a figure who rides a fully articulated and superbly rendered dragon. What makes this a particularly inspired move is that the Dragon's body - which is invulnerable to enemies and enemy fire - can be used as both a shield and a weapon; the player can move the dragon in such a way that its tail can be used to surround its rider and protect him from his enemies. Any contact the enemy has with the dragon will also deplete the enemy's power and eventually kill it. The dragon can also be 'powered-up' in a similar fashion to the space craft of other shoot-em-ups.

At various point throughout a level, small areas of land will appear at the bottom of the screen. These often contain power-ups and the player can fly the dragon down to the platform, dismount, and move around on foot.

This game was only sold as a conversion kit, although many distributors would pre-install these kits in generic cabinets, and sell them to the public that way. This is a JAMMA compatible title, so any JAMMA cabinet could be a proper Dragon Breed cabinet. The control panel to this title has a single 8-Way joystick, with fire and jump buttons on either side of it (so you can play either left or right handed). The marquee for this title is a highly detailed scene of a knight riding a green dragon, while being attacked by what appears to be a group of carnivorous fish. Although you may encounter this title in a cocktail cabinet (as the circuit board supports the screen flip for the second player), there were no specific graphics made for a cocktail cabinet (So the game will appear either unmarked, or perhaps with a few of the graphics from the upright kit jury rigged into place). 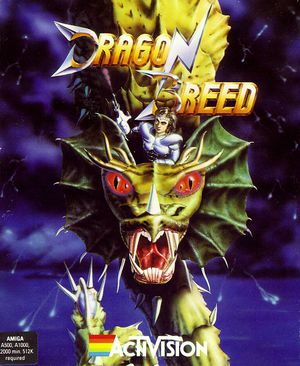 Box art for the Activision port of Dragon Breed.