R-Type is an horizontally scrolling arcade video game shoot-em-up that revolutionized the genre.

R-Type is an incredibly difficult game but, due to the superb graphics, breath-taking level design and never-before-seen game-play, the game was a huge success, and is still regarded as being the finest of its genre.

R-type's real stroke of genius was in the innovative weapon system the game introduced. The first is the beam weapon : when the player presses and holds the fire button, a beam 'power meter' starts to charge up, once the meter was full, releasing the fire button unleashed a very powerful 'plasma burst', capable of destroying most of R-type's enemy ships. The trade-off was that charging the weapon took up valuable seconds, giving the Bydo ships time to attack.

The second and perhaps most significant innovation was R-type's now-legendary 'Force Pod'. This takes the form of an invincible, detachable laser-firing pod that can be attached to either the front or rear of the player's ship, or can be detached completely and sent forth into the enemy ships. The pod laser was a stroke of true genius and, coupled with the superb level design, gave the world its first 'strategic' shoot-em-up.

R-Type is one of the most famous of all scrolling shooters. Its impressive graphics, detailed animation, inventive features and simple yet surprisingly involved game-play made it a huge success for Irem.

The first boss, as well as some of the stages, seem inspired by the artistic works of H. R. Giger (of 'Aliens' fame). He makes a brief cameo in the TV sets in "Undercover Cops".

At the title screen, the prototype version says 'Play and enjoy the game' instead of 'Blast off and strike the evil Bydo empire!', as it does in the final version. 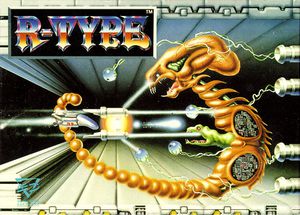 Box art for the Electric Dreams port of R-Type.