An abstract and hugely entertaining take on the classic sideways scrooling beat-em-up genre for one or two players; in which two blue and red pet ducks called 'Bin' and 'Pin' take on a variety of bizarre enemies - such as disembodied moose heads and mortar-using wolves - in their quest to rescue their kidnapped owner, Lucy.

The ducks have a powerful punch which can be 'charged-up' by holding down the button, in a similar fashion to the beam weapon in Irem's "R-Type". In addition, extra weapons such as rocket launchers and bombs can be picked up along the way.

There are also two bonus stages (which appear after levels 2 and 4). In these stages player one fights against player two. The winner is awarded 100000 points. If the time limit expires before the fight is settled, the player with the most energy is awarded 50000 points.

The main character 'Bean' (Bin) appears in the Sega arcade game "Sonic The Fighters" as a playable character.

A bootleg of this game was made by Datsu. 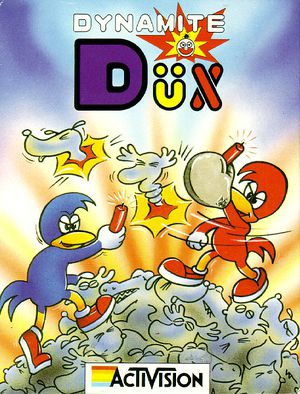 Box art for the Activision port of Dynamite Düx.