A sequel to the legendary original, released a year later. Atari, perhaps wisely, chose not to tinker with the core game-play to any great degree, instead opting to merely 'upgrade' the already excellent multi-player action that had created such a stir during the previous year.

Changes to the sequel included the ability for players to play whatever character they wanted, even if that character was already in play. The characters were now color-coded and players would find themselves taking on the role of 'Blue Elf', 'Green Wizard', etc. The in-game speech was altered from the original to allow for the new player definitions. Other changes included the ability to 'bounce' shots off walls, providing the correct item was found.

New potions and monsters were also added; the most notorious being the Fire-breathing Dragon. Defeating the creature would see the players rewarded with a permanent potion and a bag of treasure. Another notable addition was the wonderful 'It' monster : any player who was tagged by the creature would suddenly find that all of that level's creatures would ONLY chase him or her, completely ignoring the presence of the other players. The only way to remove this curse was to tag another player, thus making him or her 'it'.

The original "Gauntlet" was released in 1985, with the Gauntlet II conversion kits coming out a year later, in August 1986. A lot of the original "Gauntlet" machines of the time were switched over to Gauntlet II cabinets. They tended to stay as Gauntlet II for some time, due to the relative scarcity of kits that would convert a "Gauntlet" cabinet to that of its sequel. The proper kits were uncommon until the late eighties, by which time four-player games were taking off in a big way.

Atari held a promotional competition to coincide with Gauntlet II's initial launch. If players followed the instructions the game gives before entering a secret room (the machine provides clues on how to enter the secret rooms whenever a hidden wall is shot away on any level), the player is greeted with a screen explaining that they had been awarded extra points and inviting the player to enter his or her name. 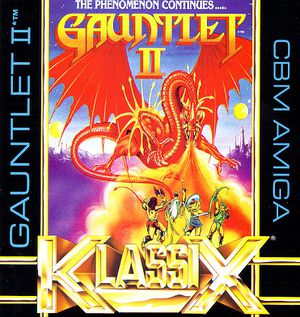 Box art for the 'Klassix' re-release port of Gauntlet II.