Hang-On is a point-to-point, sprite scaling, racing, chase-view arcade video game in which the player takes control of a superbike and must race over 5 twisting circuits, avoiding rival bikers and trying to reach the end of each stage before the time limit expires.

Hang-On's handling and superb graphics were unlike anything seen before in the arcades and, like many Yu Suzuki games that followed, revolutionised the racing genre.

The first in a series of classic racing games designed by the legendary Yu Suzuki and his team (who would go on to create, amongst others, the Out Run series, as well as this game's sequel, Super Hang-On).

This game was the first Sega game to use digitized drums in the music.

There are 2 cabinet versions : a Sit-Down model and a Ride-On model, the later of which was a large, mock-up motorcycle that the player sat on. The Sit-Down model featured a motorcycle handlebar, throttle and break lever. The cabinet also has a simulated tachometer and speedometer. The Ride-On version lets you steer your bike by moving your weight left and right, but didn't feature any of the hydraulics or force feedback that would become the staple of future Sega arcade games.

Don Novak holds the official record for this game on a 'Simulator' cabinet with 40,715,030 points.

Richard Powell holds the official record for this game on a 'Upright' cabinet with 33,923,450 points. 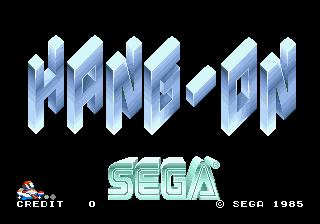