For this sequel to the superb 1985 original, Sega introduced the hilly, undulating roads that had been executed so superbly in 1986's "Out Run". The already fantastic game-play was further enhanced with the introduction of the 'turbo' : upon reaching the bike's maximum speed, players could press and hold the turbo button and push the bike to a breathtaking speed - something that was necessary to beat the game's extremely tight time limits. This had to be used judiciously, however, as the increase in speed made the bike harder to control and accelerating at the wrong time would invariably see a head-on collision with the many road-side objects that litter the stages.

Players could chose to race on any one of the four Super Hang-On courses : Africa, Asia, America and Europe. Africa is the easiest and shortest of the 4, with each subsequent course becoming both more demanding - with tighter bends and more aggressive rival racers - and having a greater number of stages to have to beat. Africa, for instance, is made up of only 6 stages, while the hardest course, Europe, has 18 stages.

A bootleg version was released in 1992. 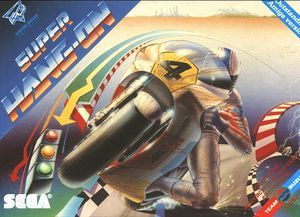 Box art for the Electric Dreams port of Super Hang-On.