Slide into the contoured seat and adjust it to fit the length of your arms and legs. Put your feet on gas and clutch pedals and try the stick shift. Select manual or automatic transmission, turn the ignition key and you're off!

It's the ride of your life. You feel the tires grip the road when you take a wide turn at high speed. You're alerted to the smallest change in the road by the feedback steering. You catch air as you fly the draw bridge and land on the down ramp. You control the car as it holds the road on the dizzying vertical loop.

Hard Drivin' might look like an arcade game but it drives like a real car. For the best lap times, drive Hard Drivin' as if it were a real car. The main difference between Hard Drivin' and a real car is that Hard Drivin' is much safer to drive. A player can test the limits of our car and his skill with no risk of personal injury, and follow a course that does not exist anywhere m the real world.

After inserting the proper number of coins to start the simulator, the player can select either an automatic or manual transmission. Turning the ignition key starts the simulator.

With Hard Drivin' a player can test drive a high-powered sports car on a real stunt course. He can jump a draw bridge, negotiate a high-speed banked turn and drive a 360-degree vertical loop. These thrilling stunts, among others, provide the ultimate realistic driving experience.

Or maybe high-speed driving is a particular player's type of excitement. He can 'put the pedal to the metal' and try to keep control around the corners, weaving in and out of traffic while avoiding oncoming cars. All this, and more, await the player behind the wheel of Hard Drivin'.

Players especially enjoy the unique instant replay feature on Hard Drivin'. Every time a player crashes, the simulator records and replays the crash sequence. Not only will the player find this entertaining, but it is also informative. The instant replay shows the player exactly what he did wrong and why he crashed (If a player wants to skip the instant replay, he can press the abort switch or turn the key when the replay starts).

A skilled player finds the ultimate competition in the 'challenge' lap (or 'grudge match' as Atari Games likes to call it). The simulator remembers the path of the car driven by the best driver on record. When a player beats the qualifying lap time, he challenges the car of the past winner in a head-to-head race.

This was the world first driving simulator to use 3-D polygon graphics.

Despite claiming to be a real driving simulator, there were a lot of discrepancies between the game's software physics and the car physics on screen. However, the cockpit physics were considered very accurate at the time.

You may have noticed that the Credit Screen lists Doug Milliken as a Test Driver (See Staff section). He is listed as a Test Driver because Atari didn't want anyone to know what he really did. Hard Drivin' had to be as accurate as possible. That meant doing an accurate car model to mathematically describe the physics of how the parts of the car (engine, transmission, springs, shock absorbers, tires, etc.) react to each other, to the road and to the driver's inputs. The pioneer in the field (in the 1950s) was William Milliken of Milliken Research. His son, Doug, has continued his father's work. Doug is probably the world's leading expert in car modeling. Doug and his father wrote the book on car modeling.

Patents that come out of Hard Drivin' are :

Prior to the release of Hard Drivin', Namco had acquired a controlling interest in Atari games by 1986. The sharing of R&D information would spawn many games of the same polygon engine years later. It can be credited that the success of the Hard Drivin' engine set the trend for the high quality simulation games in the early 90's.

One of the buildings along the speed course, a small camouflage-painted building, if approached from behind (a non-trivial task, given the off-road time limit) has a sign above its normally-unseen door that says 'THE HUT'.

If the driver slowed down and stopped in front of one of the buildings, a 'keyhole' appeared on the building's door.

There is no apparent Ferrari license shown in any version of the game.

Jeff Garabedian holds the official record for this game with 531,400 points at Aladdin's Castle at the Pontiac Mall in Waterford, MI in the summer of 1989.

Notes : In all British versions, you are in a right-hand drive car.

If the driver made a hard left turn at the start of the game, a 'secret' track was available. The track was a long straight road leading to a very short circular track (a skid pad test track) around a tower. 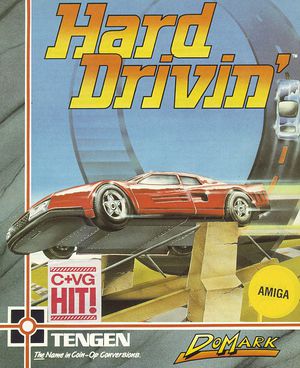 Box art for the DoMark port of Hard Drivin'.