Race Drivin' includes all of the innovative game features that made "Hard Drivin'" the industry's first true driving simulation game, plus many more new features :

There also was a Race Drivin' Panorama version that utilized 3 to 5 Monitors to give you a 180 Degree View.

There is a warning in the attract mode : 'Be Careful though, many of the stunts and manoeuvres in this game would be dangerous or fatal if tried in a real car!!!!!!!'.

On the British and Japanese versions, you are in a right-hand drive car.

Note : Handling manifests itself in the sensitivity of the steering wheel to move. 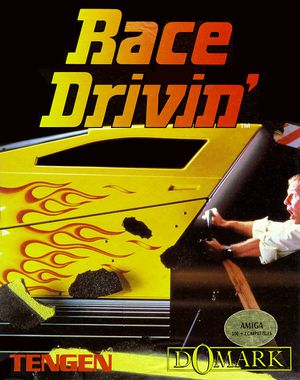 Box art for the DoMark port of Race Drivin'.