Use GO and UP buttons to regulate the speed and breath of swimmer. Tap GO button(s) to accelerate swimmer. Press UP button to allow swimmer to breath when 'breath' display appears on the screen. Swimmer will submerge if UP button is pressed any other time. Equal the computer's time for 3,000 point bonus.

Press either GO button to randomly stop wind reel. Reel will automatically stop at random if GO button is not pressed, wind reel displays wind direction and velocity (0 thru 7 mph). Push UP button to shoot and hold to control angle.

Tap GO button(s) to accelerate player. Press UP button at a proper position to hop, step and jump.

Push GO button, each time, to advance to the next heaviest class, once advanced, backing up to a lighter class can not be made. Press UP button to elect weight class. Tap GO button(s) to lift the weight, press UP button when bar bell flashes and continue tapping GO button(s) until the three judge indicators light up.

Push either GO button and release. Press UP button to vault and release at proper position to clear the bar.

While not quite achieving the commercial and critical succes of "Track and Field", Hyper Sports still proved to be very popular among gamers and, like its prequel, really came into its own as a highly addictive multi-player experience.

This game is known outside Japan as "Hyper Olympic '84".

This game is a resounding success, especially amongst real-life athletes who live to take out their aggression on animate or inanimate objects. The game inspires an all-new level of two-player competition in arcades.

Kelly Kobashigawa holds the official record for this game with 538,340 points.

After a few seconds of swimming, 'breath' will appear, press the UP button to take a breath and continue swimming. To swim better, try to predict when you will need to take a breath, this is approximately every 2-3 seconds.

If the two middle swimmers achieve a dead-heat, a frog appears and a 3,000 points bonus is awarded.

Use GO (LEFT and RIGHT) buttons to shoot either the left or right target respectively. Try to hit an many consecutive targets as possible : If the player hits everything perfect then a bird will fly past. Hit that and the player is awarded a 3,000 point bonus.

Shoot the final object with the left hand side target and a parrot will fly from right to left. This can be hit repeatedly for 1,000 points.

Press UP when you are at the end of the spring board, you will then spring onto the horse. Wait until you are in a fully upright handstand then press UP again to leap off the horse. Once in the air, hit the GO buttons repeatedly to spin. Ensure that your feet are facing the ground as you land.

After launching from the horse, tap a RUN button to rotate so you land on your head. An object falls from the sky and a 3,000 poins bonus is awarded.

First, hit GO (LEFT and RIGHT) buttons to set the wind. Then hold the UP button until the angle gets to about 5.0', release the button and hope it hits the middle of the board. A 'nice' is achieved if a bullseye is made. If you get 8 nices, in the first or second round, you will move onto the next round where you can earn more points. There is a point bonus for getting all 'nices'; in the first round it is 3,000 points, in the second round it is 4,000 points and in the third round it is 6,000 points. If you get all 'nices', the moving target will be replaced by an apple, which can be hit for an increasing number of bonus points. When the apples appear, there is no angle factor, you just have to hit the button to fire the arrow.

Press GO (LEFT and RIGHT) buttons repeatedly to gain speed. Then hold UP to get an angle of 45'; when you land you will take one step forward, press UP only when you have taken a step, then try to get a 45' angle again. Repeat for the final jump. If you hold UP just as your foot hits the board, you will get a distance boost.

If your jump starts right on the line and also has the angles of 35, 41, and then 45 degress, a rocket flies past and a 3,000 point bonus is awarded. Note that this bonus is not seen if the jump sets a new world record.

Press GO (LEFT and RIGHT) buttons repeatedly to build up the weight-lifter's power. When he has enough power, he will lift up the weights and they will flash. Then whilst it is flashing, press UP. He will then stretch out his arms and you will have to keep pressing GO (LEFT and RIGHT) for him to keep it held above his head for 3 Beeps. When the 3 Beeps are over, you've qualified.

Following a successful lift, pressing both run buttons the instant the dropped weights hit the floor causes 3 girls to be displayed, holding a '1000' sign. A 1,000 points bonus is awarded.

This is by far the trickiest event of the game. Press GO buttons to start the run. Then as you near the silver pole trap, hold UP and the pole will lower towards the trap (the closer it is, the more power you will get for the next part). Keep holding UP until you reach the top of the bar, then release. You will then let go of the pole and vault over. Hold UP just as you get half way over the bar and you will 'drift' to the right and hopefully over the bar itself. Once your character has let go of the pole, hitting the GO buttons can increase the height of the vault. 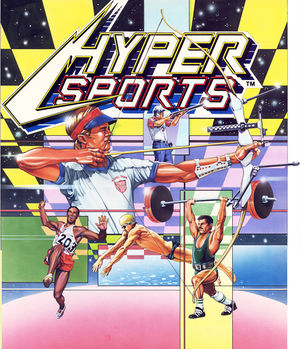