SNK's answer to Capcom's 'Commando', released a year earlier, one or two players take on the role of a "Rambo-esque" soldier as they fight on land and water to reach the village of Ikari. Most of the action takes place on foot, although players will occasionally stumble across un-occupied enemy tanks which can be entered and driven. Standing between the players and their destination are a multitude of enemy soldiers, tanks, helicopters and static gun emplacements.

Each different enemy soldier-type is equipped with a different weapon, such as a semi-automatic machine gun, automatic machine gun, grenades, and super grenades. To assist the players in their struggle, a number of power-ups can be picked up, such as extended shot range and hand-grenades. As the players' munitions are deletable, additional ammo/grenades must to be picked up along the way. players can also enter tanks, which offer increased firepower as well as resistance to enemy shots. Too many enemy hits, however, will eventually see the tank explode - this is proceeded by a warning flash to allow the player to leave the tank before the explosion takes place. Should the player be caught inside when the tank explodes, a life is lost.

Unlike Capcom's 'Commando', Ikari Warriors features 360 degree gameplay, as a result of this the home conversions could never hope to match the arcade machine's rotary joystick controls.

This game is known in Japan as "Ikari".

The two heroes of the Ikari Warriors series, Paul and Vince, appear in the King of Fighters series as Ralf Jones and Clark Steel.

Stan Szczepanski holds the official record for this game with 1,799,000 points. 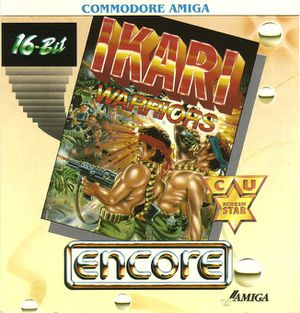 Box art for the Encore re-release port of Ikari Warriors