Lost In Translation/Line of Fire

Line of Fire is lightgun controlled arcade video game shoot-em-up for one or two players with setting ranging from enemy bases to thick jungle.

Two commandos find a special weapon hidden deep within an enemy base. Before the commandos can escape to report their findings, they find themselves surrounded by enemy forces and must blast their way through the enemy lines and escape, using the enemies' own super weapon against them.

As well as enemy troops, players will have to contend with artillery, tanks and helicopters.

This game is known in Japan as "Bakudan Yarou" (translates from Japanese as 'Bomb Rascal').

This game came in two cabinets. The sit down cabinet has two separate seats. The guns are quite similar to "Laser Ghost"'s guns only without the laser device. The upright cabinet features the guns as 9mm Uzi-type light guns that are mounted to the cabinet like in "Operation Thunderbolt". Unlike Operation Thunderbolt however, Line of Fire's upright cabinet is much slimmer. 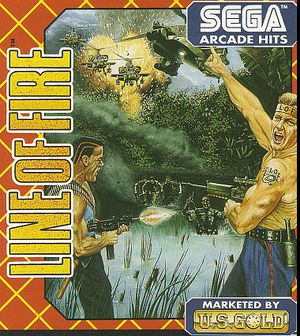 Box art for the U.S. Gold port of Line of Fire.