Terrorists have seized a passenger airplane and will execute all the hostages if their demands are not met. It is up to the veteran soldier known as 'Lone Wolf' to return to action and rescue those hostages before time runs out. Thankfully you are not alone on this mission so bring a friend and have a blast by blasting the enemies into oblivion!

Operation Thunderbolt's plot is loosely based on a real life incident known as 'Operation Entebbe' which consisted of the hijacking of Air France Flight 139 which took place in June 27, 1976 and ended on July 4, 1976. One year later, Menahem Golan directed an Israeli movie based on the incident called Mivtsa Yonatan, and was released in english as Operation Thunderbolt.

Two different versions was released in US, the new one features some changed texts (during introduction). 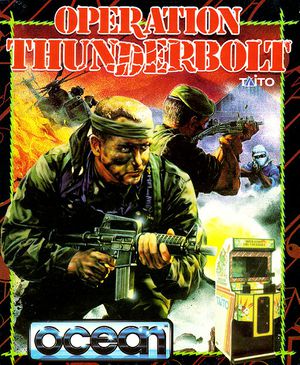 Box art for the Ocean port of Operation Thunderbolt.