Operation Wolf is a lightgun-controlled arcade video game shoot-em-up in which the player takes on the role of a soldier and must infiltrate an enemy army base. The object is to capture six bases and to save any hostages encountered on the way.

Each mission begins with the player carrying a limited amount of machine gun bullets and rockets, but extra ammunition can be collected by shooting any gun magazines or rockets that appear on screen.

Any civilians or hostages that the player shoots will result in a reduction to the player's health meter (which is displayed on the right-hand side of the screen). Farm animals, in the form of a chicken and a pig, will occasionally run across the screen; Shooting these will reveal bonus items such as health or ammunition.

Once the game is completed, the player is returned to the first mission, but with an increased level of difficulty.

Mark Twitty holds the official record for this game with 212,350 points.

A bootleg of this game is known as "Operation Bear". 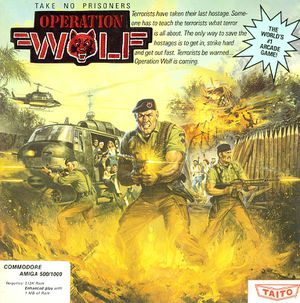 Box art for the Ocean port of Operation Wolf.