He's back in action... but with a new twist, BOUNCE power! Ready for a new generation of Pac-Man players, he can't wait for the chance to show off his new aerial maneuvers to the crowd! The "boss" ghost Clyde has recruited the talents of 2 new ghosts, Sue and Funky. Pac-Man must use his speed and cunning to outwit these annoying pests.

Pac-Man now faces new challenges as he enters the worlds of Block Town, Pac-Man's Park, Sandbox Land, and Jungly Steps. Fortunately for Pac-Man, he has the help of 2 'special items' - a green and red power pill. The green pill adds temporary speed, and the red awards double points. It's a whole new ball game for Pac-Maniacs!

Game play begins with the opportunity for players to level select among one of three playfield worlds : Block Town, Pac-Man's Park or Sandbox Land. With Block Town being the easiest and Sandbox Land being the harder, players are accordingly rewarded for selecting and completing the challenges in this mode.

The player's main objective is to eat all dots and power pills in the mazes while avoiding persistent ghosts. Using the new BOUNCE button, players can bounce their way over the ghosts to avoid being caught. But two new ghosts have been added to insure that Pac-Man doesn't have it too easy. In fact, one of them can also bounce in the air like Pac-Man. Fortunately, these rivals of Pac-Man are only found in the more demanding worlds and mazes.

After the superb platform action of the series' previous game, "Pac-Land", Namco chose to return the series to its roots with the re-introduction of the 'eat all of the pills in the maze game-play of the earlier classics. Pac-Mania feels somewhat different to its illustrious predecessors, however, due to Pac-Man's newly-acquired 'jump' ability. The mazes are now rendered with a pseudo-isometric viewpoint, allowing the player to jump over the chasing ghosts and make an escape.

The 'Pac-Man's Park' maze is basically the original "Pac-Man" maze.

Another new feature in this game is the appearance of several 'special items' (in addition to the traditional fruit bonuses - cherries, strawberries, oranges, apples, bananas, apricots, bells, and keys). These items include candy, hamburgers, ice cream cones, coffee, and 2 special kinds of power pills. The pills, which appear in addition to the traditional power pills, give Pac-Man more points for eating ghosts and also give him extra speed, both of which come in very handy during game-play. Pac-Mania was to be Pac-Man's last arcade outing.

Donn Nauert holds the official record for this game with 385,570 points.

Difference Between US and Japanese Version : 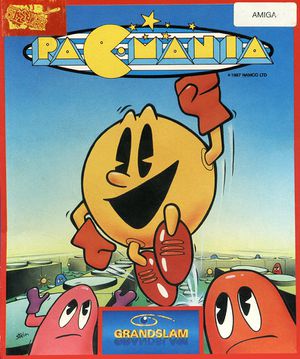 Box art for the Grandslam port of Pac-Mania.