7 ferocious dinosaurs gnaw, gore and bite each other until they become the winner's dinner. Eat cavemen to regain health! Feature digitized stop-motion animation. Each of the 7 characters has an arsenal of nearly seventy moves, including special and finishing moves. Each character has its own ending.

The concept of the game borrows heavily from Taito's 1992 arcade unit "Dino Rex".

Atari had intended to create another upgrade for PR 2.3 and was scheduled at this time for January 1995. This upgrade would allow the player to face a boss monster at the end of the game for total domination of the world. The final boss was supposed to be a horned dracolich (animate dragon skeleton) imprisoned in the moon, with three claws on each limb and 3 spines on the end of his tail. It was also supposed to have the powers of flight and the ability to drain the opponent's life-force. The final battle ground would be a moon scene with the skeletons of numerous dinosaurs laying around in decaying states. The ground would be covered with craters and giant, glowing cracks. A teleportation warp would exist overhead. Unfortunately, Atari scrapped the idea for this upgrade because Time Warner Interactive been too busy at this time to work on an upgrade and the boss was never came into existence... :(

The June 1996 issue of GamePro magazine confirms that Ellie Rovella of Gilbert, Arizona became enraged when her 11-year-old son bought Primal Rage for his Sega Genesis and played the game using GamePro's strategy guide to execute Chaos' golden shower fatality. Rovella was so outraged she not only returned the game, but also launched a grass-roots campaign. As part of this, the fatality was famously censored on the Super Nintendo version by placing a large 'censored' bar over the screen when it was performed.

Matthew Valenzuela holds the official record for this game with 124,900 points.

A line of toy action figures based on all 7 characters of PR were made by Playmates in 1996.

Atari released a limited-edition soundtrack album for this game (All The Rage).

Both players must choose Armadon. Do the Spinning Death move and collide in mid-spin three times in a row. A bowling game will pop up.

One player should do a multi-hit combo a worshipper will enter the area, hit him and they will fly in the air. The other player needs to hit the player before he hits the ground--toward player 1, if you keep this up for ten hits, the ref will bring out a volleyball net. Play for 3 pts.

To check what version of Primal Rage your arcade has, push Up on player1 joystick and pull Down on the player2 joystick simultaneously, during the title screen.

If you do a 'Fart of Fury' so that the green cloud is in the air as the Sudden Death begins, the sky will rain cows instead of meteors.

If you don't do an 'Fart of Fury' on Chaos' stage, the sky will rain bricks.

If Sudden Death occurs on Blizzard's stage, the sky will rain ice balls. 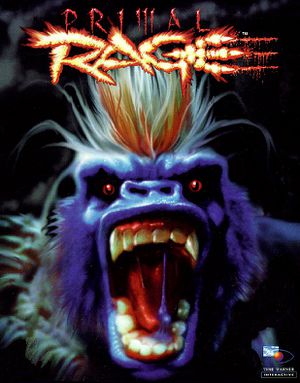