The legendary, genre-defining game in which 1 or 2 players chose from eight selectable World Warriors and must defeat the other seven, before finally taking on 4 non-selectable 'boss' characters.

Each fighter is as distinctive in feel and fighting style as they are in physical appearance, with each protagonist possessing several fantastical 'special moves' (the first genuine example of such in the fighting genre) to accompany the usual array of kicks, punches and throws. These special moves, while being difficult to execute due to the complexity of the joystick and buttons combinations required, allowed the fighter to inflict huge amounts of damage on their opponent.

A fighting game in the truest sense of the word, with deceptively deep and strategic game-play ensuring that experienced 'Street Fighter II' players would destroy simple 'button mashers' with relative ease.

SF2 is the fighting game that changed the face of video-games forever. So innovative was the game, that many of the game-play elements that fighting fans now take for granted, appeared HERE first. Within just weeks of release, its place in gaming history was assured. Any fighting game that has appeared after SF2 is influenced - to a greater or lesser degree - by the Capcom legend.

During the development of SFII (and before the release of "Final Fight"), the very first free-hand drawing was done in the fall of 1988. At this time, eight prototype characters and an Island design was drawn. Just like the world map of the final version, the island would scroll on-screen to show the next destination, culminating at the top of the island.

With the rapid success of Street Fighter II, it was rumoured that Mattel, the makers of Barbie, sued Capcom for using the name Ken - insisting that people would confuse the Street Fighter character with that of Barbie's boyfriend. To avoid further litigation Capcom gave Ken a surname.

The Story Of Sheng Long

Fans of Street Fighter are well accustomed to the story of 'Sheng Long'. SFII was already very popular in the arcades when the April issue of Electronic Gaming Monthly (EGM) came out. The story relates to a supposed secret character in SFII; his name was Sheng Long, the 'master' of Ryu and Ken. To reach him, according to EGM, the player had to survive a number of matches against M. Bison WITHOUT actually touching him. Should you achieve this, Sheng Long would apparently appear and kill Bison, and the player would then fight him instead. His style was essentially a mix of Ryu's and Ken's styles, but was much faster and inflicted far greater damage. When the EGM issue came out, thousands of gamers spent hours pouring money into SFII machines, trying to get to this non-existent character. Capcom had neither confirmed nor denied the Sheng Long story - obviously spotting the increase in revenue the mythical character could generate - and it was only much later that EGM themselves admitted that it was just an April Fools' joke.

Many have conjectured whether Mike from the original "Street Fighter" is the same as Balrog ('Mike Bison' in Japan) from SFII. While Capcom of Japan confirms this, Capcom of America strenuously denied it (mainly due to the possibility of a Mike Tyson filing a lawsuit). In Japan, as long as the name is changed, it's far easier to basically rip off someone else's character and have it treated as an original creation (in America it would be some form of copyright/identity theft). Ironically, as a result of the name change, Vega is a better fitting name for the Spanish warrior (Balrog has its roots in Nordic mythology, while Vega is a Hispanic name).

Chun-Li is notable for being one of the first successful and popular female video game protagonists. When SFII was released, most female characters in games existed as objectives to be rescued or cast in the roles of other supporting characters, such as townspeople, girlfriends, the occasional opponent, or simply background decoration. Beyond RPGs, there were very few female heroes in action-based video games. After the success of SFII and Chun-Li's popularity, female protagonists became more and more common. Since then, in games with selectable characters, at least, there will generally always be one or two selectable female characters.

Each stage had background colours that would change in later versions of the game (mainly time of day changes), here are the original color schemes for each stage background :

During SF's height of popularity (basically during the SF2 years), various pieces of merchandise were released, some relating to SFII and some relating to the SF film. One example is the SFII Board-game (1994, MB Milton Bradley) in which the player controls one of six world warriors as they try to defeat Bison before time runs out (the player has one mover per World Warrior, but the board only has enough space for six).

A Street Fighter II unit appears in the 2002 movie 'Friday After Next'.

A Street Fighter II unit appears in the 1993 movie "City Hunter" (known in Hong Kong as Cheng Shi Lie Ren). In one scene, Ryo Saeba (Jackie Chan) gets knocked into an arcade machine, then the following characters appear : Ken, E. Honda (Chan; he is called E. Honde in this movie because Chan is a spokesman for Mitsubishi), Guile, Dhalsim, and Chun-Li (also Chan (!!!)).

None of the endings are translated 100% accurately from Japanese to English, but most are pretty close :

In the US versions, Blanka's mother says that he was lost when his plane crashed in Brazil when he was a baby.

In the Japanese versions there is no explanation of how, when, or where mother and son were separated.

Since the anklets she gave to Jimmy BEFORE they were separated still fit him, he was probably not supposed to be a baby when he was lost.

In the US versions, she calls it 'Bison's drug'.

This was probably supposed to be 'drug ring', as the word 'ring' was added in later versions of the game.

There is no mention of drugs in the Japanese versions.

Dhalsim says that the photograph is of him a long time ago.

In the US versions, he says it is him 'in his past life'.

Since only three years had passed, he obviously didn't actually mean that he had died and been reincarnated since the photograph had been taken.

In the US versions, Guile's wife's name was changed from Julia to Jane.

His daughter was given the name Amy (She was not mentioned by name in the Japanese versions, but her name is Chris).

In the US versions, Guile asks 'Bison' if he remembers : him (Guile), him and 'Charlie' and Cambodia.

'Bison' says he remembers and that Guile was not the runt he was then.

None of this is said in the Japanese versions.

In the US versions, after his wife 'Jane' stops Guile from killing 'Bison', she says that killing him won't bring 'Charlie' back, only make Guile a murderer, just like Bison.

In the Japanese versions, Julia only says that killing Vega won't bring Nash back.

She does not say that it would make him a murderer.

Finish the game on 1 quarter to see an additional credit sequence.

US versions have the "Winners Don't Use Drugs" screen.

If you enter the classic Konami code UP(x2), DOWN(x2), LEFT, RIGHT, LEFT, RIGHT, MP, LP on the Player-2 side during the demo fight in attract mode, it makes a bunch of zeros appear: -

Start a fresh game on the left side (1P). Select any character other than Ryu. Play the game until you reach Ryu. Lose. Join in the game on the other side and hit 2P BEFORE the timer runs out. Select Ryu and enjoy fighting Ryu.

Guile Freeze Himself (aka 'Pose' and 'Statue')

Get close enough to your opponent to do an upside down kick. Charge back on the joystick. After charging back, press roundhouse to execute the upside down kick, while continuing to charge back. As soon as Guile kicks and starts to flip around to land on the ground, throw a sonic boom with fierce (this is why we have been charging back). Guile will freeze standing up on one leg (which is one of the frames of Guile's landing after the upside down kick).

Un-freeze : You can 'un-freeze' at any time, even after the round ends (that makes it a good pause). To do so, execute a flash kick (charge down for 2 seconds then press up and any kick).

Guile's Handcuffs (aka 'Freeze the Enemy')

Though it's not required, its easiest to do this move when the enemy is dizzy. Charge down for 2 seconds. Then press UP (as if you were doing a flash kick) and hit the strong and forward buttons, while trying to hit strong a split second before hitting forward. Basically what you are doing is throwing your opponent with strong, and while in middle of the throw, you do a flash kick. When this move is done, you see all of the frames of Guile's strong throw, however instead of flying across the screen at the end of the throw, the enemy sticks to you.

Un-handcuff : The 'un-handcuff' is the difficult part because it requires doing Guile's Shadow Throw. Charge back for 3 seconds then hit forward on the joystick along with the Fierce and Roundhouse buttons. Just like in the Handcuffs, you should try to hit the Roundhouse button slightly before the Fierce button. Also, you should hit the buttons slightly after moving the joystick forward. You can practice this by throwing sonic booms and seeing how far forward you can walk and still throw the sonic boom.

Charge back then hit forward on the joystick along with the Fierce and Roundhouse buttons. Just like in the Handcuffs, you should try to hit the Roundhouse button slightly before the Fierce button. Also, you should hit the buttons slightly after moving the joystick forward. You can practice this by throwing sonic booms and seeing how far forward you can walk and still throw the sonic boom.

Guile Reset The Machine (aka 'Blackout')

Do a throw with strong. Then do a flash kick before the opponent hits the ground. You can also try doing this by doing a flashkick with fierce and roundhouse.

Throw a yoga fire (down, down-forward, forward) with both the Fierce and Forward buttons. This only works on versions 3 and 4 of the SFII boards.

(Blanka rolls slow, then fast then bites without landing) : Do a slow roll (with jab). While rolling, charge for a second roll. Roll with fierce before Blanka lands. While in the second roll, push the joystick forward and hit fierce to bite.

Ken or Ryu Get Stuck On The Car And Bounce

Start the car bonus round. Break the left (or right) side of the car until it blocks. Face away from the car. Do a jump toward the car. Kick right after you jump but not at the same time as you jump. If you are lucky, you will be facing backwards. This is a tough one, so have patience.

Do a normal hurricane kick then tap roundhouse extremely fast (fast enough to do Honda's Hundred Hand Slap) while Ken or Ryu is in the air. 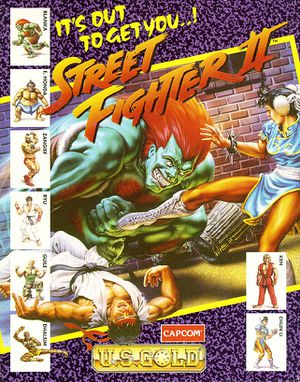