Rampage is an arcade video game featuring 3 giant all-powerful creatures fighting for survival in various city environments, against a continuous onslaught of National Guard and police forces! Each player becomes one of these mighty warriors capable of collapsing skyscrapers into dust and rubble. All 3 of the creatures are human mutations : an ape (George), a lizard (Lizzie), and a wolf-like creature (Ralph).

Each player controls his character with a joystick, a Jump button (which is also a Game Start button), and a Punch/grab button. Using the joystick, the player character can move left, right, up, or down (4 directions only). Hitting the Jump button while using the joystick enables the character to jump in any of four directions. Hitting the Punch/grab button enables the character to punch and/or grab in any of four directions. On the control panel are three sets of these controls : left side (George), centre (Lizzie), and right side (Ralph).

Game play begins for any one player when, after inserting proper coinage, he presses the Jump button of the character of his choice (only one character for each player per game). Three separate newspaper 'datelines' appear on the screen, one for each creature. These 'datelines' reappear after every rack. Only 'datelines' for ACTIVE player characters will display information: 1) the day - number (may or may not appear) which indicates the rack number, 2) the name of the city environment, and 3) a message about the creature or a game play hint. Next, the city environment appears on the screen, mainly consisting of high-rise buildings, and now the battle begins. The player character appears in the city where it is attacked by the National Guard and police forces with massive fire-power. It must run, jump, climb buildings, and punch its enemies to stay alive until the end of the rack.

In this initial rack, hazards to the player character are mainly: 1) National Guard helicopters with machine guns and 2) police swat team members moving from window to window of the buildings using rifles and throwing sticks of dynamite. Every time it is damaged, by getting punched, shot, shocked, or by falling or by being on a collapsed building, it loses 'power'. This is measured by a 'damage' gauge for each creature at the top of the screen. When the gauge reads empty, the mutant creature shrinks back to its human form which then creeps off of the screen. At this point, the game allows the player a time limit to "buy back in" to preserve his rack position. Provided as a game option, the game operator may also allow the player a short time limit to "buy back in" to protect his point total. If the player "buys in" in time, before the human form leaves the screen, then it will grow into being the creature again. If not, then the same creature will drop back in from a dirigible. Beyond the time limit the game is over for the player.

However, the rack itself ends ONLY when all of the buildings have been destroyed (either by the creature or by swat team members placing charges of dynamite at the base of each building). If the creature has survived to this point, then the game advances to the next rack. If the player character survives to the end of the rack, the power loss is carried over to the next rack. The player scores points by punching or eating the creature's enemies and also by destroying buildings. But due to the continuous power drain caused by damage, the player character MUST find and eat food to restore its power level. By punching holes in the buildings, the player MAY find Food (increased power), Bonuses (points) or Hazards (decreased power), e.g.

The types of Hazards and Bonuses found OUTSIDE of buildings vary and may increase in difficulty in succeeding 'city environment' racks, e.g.

Another source of game points comes from the player character grabbing a fleeing 'townie' from a building window. Two benefits : 1) While holding the 'townie', all swat team members disappear from the building windows and 2) accumulating points are scored during the time the townie is held.

For the continuous buy-in feature, hundreds of racks of 'city environments', have been created.

Rampage incorporates Bally Midway's JOIN THE ACTION feature : each set of game controls includes a corresponding start (Jump) button, which is activated independently. This allows a person, after inserting the proper coinage, to begin play at any time including while the other sets of game controls are in use.

Rampage has an impressive 768 different levels. The 128th level of the game is 'Plano, Illinois', and was the only level in the game with less than three buildings. Brian, one of the designers, said : Plano Illinois was only two buildings because Plano Il is a Tiny town, in which my partner Jeff was born and raised.

These are the random headlines you may encounter during the game. These headlines appear when the next day begins :

A Rampage unit appears in the 1991 movie 'Terminator 2 - Judgment Day'.

Scoring in this game is relatively complicated due to the various numbers of enemies. In addition, you also score points for hitting buildings and collecting bonus and/or food items.

You start the game with your monsters at the bottom of the screen. After the game starts, it is time for you to start the 'urban renewal' process. 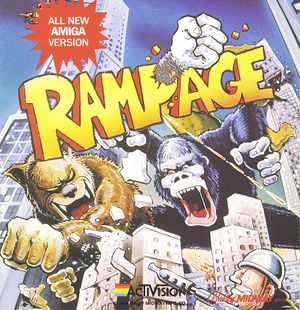 Box art for the Activision port of Rampage.