Renegade is an arcade video game beat-em-up that sees a single player taking on huge gangs of street fighters. The game is spread across four stages levels, each of which is only 2 or 3 screens wide; giving the player nowhere to hide. Renegade was a rather more brutal game than others of its genre, and even allowed the player to keep attacking a downed enemy. It was also possible to pick up fallen enemies and throw them at oncoming fighters.

Renegade's designer would take what they learned while designing and writing Renegade and improve upon it in every conceivable way for the legendary "Double Dragon", released a year later.

Western version of "Nekketsu Kouha Kunio-kun". The game's graphics were redrawn for the game's localization as Renegade to the game's characters and settings a western feel. The plot was also changed from beating up numerous gangs who are bullying the main character's best friend to rescuing the main character's girlfriend. Kunio, the main character in the Japanese, would return in numerous games including "Nekketsu Koukou Dodgeball-bu", the Japanese version of "Super Dodge Ball", some which underwent a similar localization process when they were released in the west (such as the NES game River City Ransom).

On the first 2 levels, try to throw the enemies from the platforms; being careful, of course, to avoid falling from the platform yourself. Also, to kill the third boss, run away from her and hit the kick button (repeat). When fighting the knife gang on the final stage, if you are stabbed even once, you will die. The safest way to defeat them is with dashing punches. Never engage a single enemy or stay one place for too long, otherwise you will be attacked. 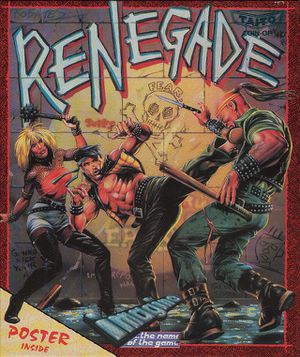 Box art for the Imagine port of Renegade by Bob Wakelin. 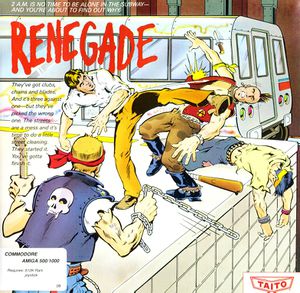