Double Dragon is an horizontally scrolling arcade video game beat-em-up, where martial arts masters and twin brothers Billy & Jimmy Lee (nicknamed Hammer & Spike in the U.S. arcade cabinet) must defeat the savage street gang known as the Black Warriors to rescue Billy's kidnapped girlfriend, Marian. Standing between the brothers and Marian are four huge, colorful and varied levels; each populated with a wide variety of thugs. Many of the game's enemies carry weapons (knives, baseball bats etc.) and should Billy or Jimmy manage to knock the weapons from the enemies' hands, the heroes can pick the weapons up and use them against the enemies.

Double Dragon was a huge success due to the many game-play innovations it brought to the genre (see TRIVIA for details), but it demonstrates its final moment of inspired genius at the very end of the game. Should both players still be alive after the final boss has been defeated, they will have to fight each OTHER. The winner of this fight will be the one who wins Marian's affections.

Made up of six distinct warriors - plus Willy, the game's final boss - each is different from the others in both physical appearance and fighting style. As such, the game-play never feels repetitive. The members of the Black Warriors consist of the following fighters :

Licensed to Taito for manufacture and distribution (Prom Stickers : 21J) in America and Europe (July 1987).

Double Dragon may not have been the world's first scrolling beat-em-up (that accolade belongs to Technos Japan's own "Renegade", released in 1986) but it is the world's first CO-OPERATIVE fighting game and as such defined its genre. The varied, multi-colored sprites and hugely detailed backdrops - married to instinctive, one or two-player game-play - was something that had never really been seen in the fighting game before and Double Dragon quickly became a legend in its own right. The game would be the inspiration for an entire genre and classics such as Capcom's "Final Fight" owe a huge debt of gratitude to the Technos legend. The game was such a huge hit, that when the home versions finally came out, the rear side of the package advertised, 'You'll never have to stand in line to play Double Dragon again!'.

Double Dragon's hugely innovative game-play and superb graphics proved to be too ambitious for the host Technos hardware and the game was plagued with the now notorious 'slowdown', that occurred whenever a large number of fighters appeared on-screen.

The game's director, Yoshihisa Kishimoto, reportedly conceived his initial idea for Double Dragon around the date of July 20th in 1986, the 13th anniversary of Bruce Lee's death.

Director Yoshihisa Kishimoto got the idea of picking up an enemy's weapon from his previous game, "Renegade" ("Nekketsu Kouha Kunio-kun" in Japan). During the first stage of Renegade, he noticed that the armed enemy characters were not holding their weapons when they were on the ground.

On the first stage of the game, a billboard for "Nekketsu Kouha Kunio-kun" (the Japanese version of "Renegade") can be seen atop a building prior to the first boss battle.

The car at Billy and Jimmy's garage resembles the interceptor from the laserdisc game "Road Blaster", which was one of director Yoshihisa Kishimoto's previous games at Data East before he left the company to work for Technos.

The 3 kanji characters on the game's official logo are (in order) : 'Sou' (Twin) 'Setsu' (Cut or Intercept) and 'Ryuu' (Dragon, also pronounced 'Tatsu'). Thus, the title can loosely be translated as the 'Twin Intercepting Dragons'.

The fictional martial arts practiced by the Lee brothers is called Sousetsuken or 'Twin Interception Fist', which is described as a combination of Shaolin Temple Kung Fu, Karate and Tai Chi Chuan. The name is derived from Bruce Lee's own martial arts style Jeet Kune Do, or Sekkendou in Japan, which is known as the 'Way of the Intercepting Fist'.

The character names are derived from the 1973 Bruce Lee film, 'Enter the Dragon'.

Double Dragon contained a number of bugs, most of which were never fixed despite several revisions of the ROM. The best known is a bug in the way enemies attack the player. Sportingly, enemies will not attack the player from behind, but will instead walk up to them and try to move past so they can attack from the front. Thus, by standing with your back to an enemy, it was possible to wait for them to get close and then elbow them in the face, without fear of being attacked. Another common bug was the 'infinite bouncing' bug. Due to the fixed way in which objects in the game would bounce off walls, trees etc, it was possible to drop an item between two tree stumps on the forest level, and it would bounce back and forth forever. In the first version of the game, this could happen to player characters who fell off either stump, the only way to continue the game being to allow the timer to run down. Another less serious bug was the ability to throw weapons from one level to the next. Usually, weapons were discarded at the end of a level. On some levels however, the transition to the next level was achieved simply by scrolling the screen one whole screen to the right, or down a cliff. By standing at the extreme right of the level and jumping just as it ended, the players character would drop their weapon in mid air, throwing it far enough to be picked up again once the screen had scrolled on.

A Double Dragon unit can be seen in Drake and Josh episode 'Movie Job', but the marquee reads 'Dragon'.

Tiger Electronics released a board-game based on this video game (same name) in 1989 : The winner is the first player to successfully fight his or her way around the game board to Jimmy's Hideout to rescue Marian. You will pass through the slum section, the industrial section, the forest section and the hideout section on the rocky road to victory.

Comic Book : Six-issue limited series published by Marvel Comics in 1991. (cover dated from July to December). Written by Dwayne McDuffie for the first four issues and by Tom Brevoort and Mike Kanterovich for the final two. In this comic, Billy and Jimmy Lee were the twin inheritors of the 'Dragon Force', a mystical force that granted the Lee brothers their powers, as they fought against the occult crime lord Nightfall. Marian is reimagined as a policewoman (a depiction later featured in the cartoon series) and Stan Lee appears as Billy and Jimmy's long-lost father.

Cartoon : TV series produced by DIC Entertainment and Bohbot Entertainment, which lasted two 13-episodes seasons in 1993 and 1994. In the series, Billy and Jimmy are twin brothers who were separated at birth, with Billy being raised by his father's sensei, the Oldest Dragon, while Jimmy was raised by the evil Shadow Master to become his successor, the Shadow Boss. After the second episode, Jimmy realizes the evils of his way and joins his brother, becoming the Double Dragons. Inspired the 1994 home console fighting game "Double Dragon V: The Shadow Falls".

Live-Action Movie : Released in 1994 by Imperial Entertainment. Starred Scott Wolf as Billy, Mark Dacascos as Jimmy, Alysa Milano as Marian and Robert Patrick as original villain Koga Shuko. Directed by James Yukich, with a screenplay written by Paul Dini (of Batman: The Animated Series) and Neal Shusterman. In the movie, Billy and Jimmy are young twin brothers who possess one half of a magical medallion, with the other half possessed by crime lord Shuko. It inspired the 1995 Neo-Geo game "Double Dragon".

The original Japanese version by Technos has a different storyline than the one used by Taito in the International version. The Japanese storyline is more developed and does not use the Spike and Hammer aliases.

When Willy comes out of the steel door, wait for him to come down to the lower side of the screen; as soon as he leans out downwards enough, hit him and make him fall (be careful in using flying kicks, as you risk to fall on the spikes). If performed with the correct timing, Willy will NOT fall on the ground: he'll fall straight on the spikes, dying at once.

Note : if you use this trick on all the other enemies that show up before Willy, sometimes, after the final boss is thrown in the spikes, an enemy will jump out of the spikes, and fall on them straight afterwards. 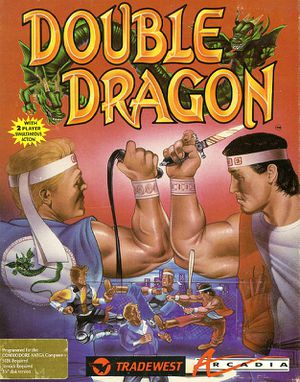