Following his defeat at the end of the original Double Dragon, Willy, the leader of the Black Warriors, retaliates against Billy and Jimmy Lee by murdering their friend, Marian, leaving the brothers with the task to avenge her death.

The sequel to Double Dragon is essentially an upgraded version of the original game, but with with a two-way attacking system similar to one previously used in Technos Japan's 1986 arcade game "Renegade". Many of the attacks and combos from the original "Double Dragon" are retained, as well as new techniques including the invincible Cyclone Kick.

The stages and weapons are redesigned versions of items previously featured in the original game. There are a few new traps such as a bulldozer in the middle of Mission 3 and all of the transition sequences between stages are now done with the character entering the next level via a lift, making it impossible to carry one weapon to the next area.

Most of the enemy characters return from the original Double Dragon, with some given facelifts, but the stage bosses are all new. The enemies are as followed :

The yelling sound heard when a coin is inserted comes from an enemy in the game called 'Chin Taimei' (the mission 3 boss that fights using 2 sticks).

Billy and Jimmy trade their original blue and red outfits for black and white respectively in the game. They appear in the game's ending wearing their original colors. Marian wears a yellow dress in the game and her character sprite is slightly redrawn from the original game.

Unlike the original "Double Dragon", the controller configuration for part two were changed from standard punch and kick buttons to less conventional left attack and right attack buttons.

Double Dragon II originally began development as a chip upgrade of the first game. However, there was an incentive to add more features to the game, so this plan was discarded. The ROM sizeof the game increased and the game was seriously reworked. However, the increased difficulty and reworked play controls drove away fans of the original game. 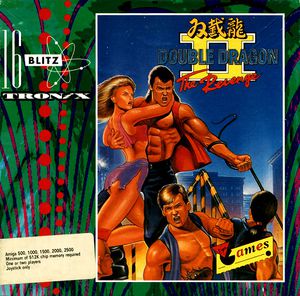