A mysterious fortune teller warns Billy & Jimmy Lee about the rise of a powerful enemy in Egypt. Since the Lee brothers are looking for a true challenge to put their martial arts skills to the ultimate test, they agree to face this mysterious new enemy. They embark on a world quest - joining up with new allies in the process - and try to lay claim to the famous 'Rossetta Stone'.

The 3rd and final arcade entry of the Double Dragon series (not counting the later Neo-Geo fighting game based on the movie) features a completely new gameplay system and graphics from the first two installments. The game can played by up to 2 or 3 players, depending on the cabinet and settings. The 3rd player takes control of a yellow-clad Lee brother named Sonny, who is exclusive to this game. Techniques from the previous games such as the hair grab and the elbow punch are gone, but new ones are added such as the belly-to-back throw and the back-to-back hurricane kick, as well as the ability to dash by tapping the joystick left or right twice.

There are 5 stages in the game :

The first two Double Dragon games were created by an internal team at Technos, but this game was written by an outside team called East Technology (see Staff section for more information). A graffiti in the first stage reads "Gigandes", which one of the team's previous games.

There are 4 character types, the Lee brothers and 3 new character types (who are available via the weapon shops in the American and World versions, and are selectable in the Japanese version). However the original idea for the game was for the player to select between Billy and Jimmy Lee, or one of the 3 new characters introduced in the game. The original characters which were Roney Urquidez (who originally wore orange), Chin Seimei (who originally wore red) and Masao Oyama (who was originally named Masahiko Oyama). Apparently the designers considered the possibility that 2 or 3 players playing the game at the same time might want to control the same character, so they revised this by creating Sonny (the 3rd Lee brother) and 2 siblings for each of the new characters. A separate character portrait was made for Jimmy, which is unused in the released Japanese version. The game's ending depicts the original 5 characters, as does the artwork on the Japanese sales flyer.

The US version is slightly different, it has the 'Winners Don't Use Drugs' screen.

The Japanese version discards the weapon shops completely from the game. Instead, the game asks the player to select from the 4 character types available when they begin (Lee, Chin, Urquidez or Oyama). The one-armed stand head-butt and the hurricane kick are available as part of the default moveset, but the hurricane kick is made hard to execute. While controlling one of the Lee brothers, a nunchaku or a sword can be found on the floor in certain stages. The first stage is slightly re-arranged, with the starting point moved in front of the Power Records store and the conveyor belt inside the warehouse removed. 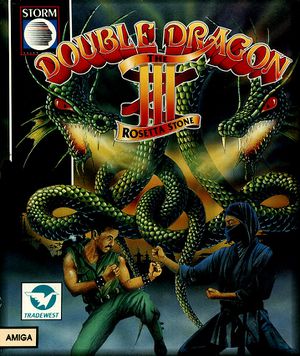 Box art for The Sales Curve's port of Double Dragon 3.