Lost In Translation/RoboCop - The Future of Law Enforcement

RoboCop - The Future of Law Enforcement is a multi-style shoot-em-up based on the the 1987 movie of the same name. The game's story mirrors that of the film, with former cop Murphy, now a half-human cyborg called 'RoboCop', on a quest to bring down the evil OCP corporation.

RoboCop features nine levels of action, with two of the game's nine stages being into-the-screen target ranges, in which players can try to accrue bonus points and earn extra health. Wooden crates occasionally bar RoboCop's progress, but these can be punched to remove them. Marked crates can be smashed to reveal one of three Weapon power-ups; Three-way Gun, Dual Laser and the incredibly powerful Cobra Gun.

The film's incidental music plays throughout the game and RoboCop's speech is sampled directly from the original film.

After Ocean Software secured the RoboCop license, they sub-licensed it to Data East who created the coin-up game. Ocean then ported the game to various home computers.

Most of RoboCop's sounds were borrowed from "Heavy Barrel".

The motorbike which damages you before you draw your gun can be beaten by jumping just before it comes on the screen. A shop window has a small menu type poster in it; jump around about there. When you land, punch the bike (it flashes green and doesn't damage you). Punch it when it returns to kill it.

When fighting the ED209, time your jumps until just AFTER it has fired at you, allowing you to jump over its shots. When it moves to the left third of the screen, stand close to it. RoboCop's weapons arm will now point at a steeper angle (more into the ground). Now move away slightly and jump away when ED209 fires. Its shots will go into the ground and not trap you at the left edge of the screen.

Another approach allows you to defeat the ED-209 almost instantaneously: First, make sure you still have the Three-Way Gun (not essential but makes things a little quicker and easier), then as soon as you clear the area of enemies the music will change and the ED-209 will growl. Simply walk to the right side of the screen (Before ED-209 enters) and fire repeatedly diagonally up and right. If done correctly, the ED-209 will come out already defeated and run away without so much as scratching you.

To get extra health, shoot the fat guy using a girl as a shield. He moves forward to shoot at you - shoot him then.

Target practice : Getting all of the targets (100% hit) gives *extra* capacity for your energy bar.

Go over the top of the car crushers, and pick up the baby food. Try and save the Cobra assault cannon for the end of the level - this makes thing much easier. If you shoot just under the cab of the final enemy, you can kill the guy throwing grenades at you.

Alternate way : Get the cobra cannon, clean all the enemies at the elevator, the raise the elevator until the cobra cannon is slightly higher than ground level (about 1/4 inch or less), fire ONCE to the right and watch your score soar. Don't move or your score will stop. Also, this only works on the bootleg board - the original did not do this, probably due to a bug (At the far right, just outside of the screen, are some boxes and the machine thinks you hit them but doesn't destroy them).

Shoot the metal crushers with the Cobra Cannon, or PUNCH repeatedly if you get trapped. The final enemy is a crane which swings a steel ball suspended from an extensible chain. Don't shoot the wooden box, stand on it and shoot the cab of the crane. Also, try to save the Cobra Cannon (by punching bad guys instead of shooting them) and use it on the crane.

Don't charge through this level, especially on the conveyor belt. Be wary of the first guy armed with a flame thrower; if you're quick enough, you can shoot him before he gets a chance to shoot at you.

The military ED209 at the end of the level can be beaten by crouching under the OCP logo when it charges. Jump and shoot the weapon arm when it retreats.

You need to move through this level fairly quickly as time is a little tight. The ground-based moving gun turrets can be shot from the platform below, and careful diagonal shooting can destroy laser emplacements situated on any platforms above you. Concentrate on laser turrets which are diagonally away from you, as their fire is the hardest to dodge.

Use diagonal shooting to destroy laser turrets on the platform above you (see also Level Six comment).

The baby food stored in the box gives all your energy back. When you reach the single lift which goes up multiple floors, the best way to avoid being trapped on it by laser fire is to JUMP onto the next level just before the lift reaches it. Timing between the laser shots is critical.

When this lift reaches the top, stop just short of the floor (you should be able to see/hear the light curtains and laser turrets) and then go back down as far as you can. The laser turrets and curtains sometimes disappear.

When ED209 is destroyed, kill Dick Jones (in the same way as a gunman holding a hostage is killed). The president is not harmed by your gun shots and must be punched from close range. 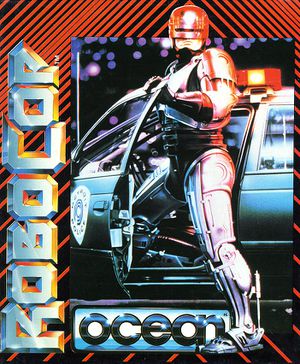 Box art for the Ocean port of RoboCop.