A direct sequel to 1988's "Shinobi", Shadow Dancer features Hayate, a young Ninja who, together with his faithful pet dog, Yamato, must battle against a terrorist group known as the 'Asian Dawn'. The Asian Dawn have planted a number of time bombs throughout the metropolis and Hayate and Yamato have courageously set out to gather up all the explosives placed by the evil gang and to annihilate the criminal mastermind behind the Asian Dawn.

Shadow Dancer is set twenty years after the original game and introduces players to the new character of Hayate, son of Shinobi's original hero, Joe Musashi. Game-play is very similar to that of Shinobi's, and features the jumping and projectile weapon-based game-play of its illustrious older brother. However, a new and crucial attacking move has since been added to the Ninja's arsenal. Pulling DOWN on the joystick and pressing the ATTACK button sends the hero's dog to attack the nearest enemy. This will stop the enemy from attacking the player as he wrestles with the dog. The enemy must be killed quickly, however, or the dog itself will be killed. If the dog is killed, a small puppy appears, and once the player has killed a set number of enemies, the puppy will grow to be a full-sized dog who can once again be used to attack enemies.

The subtitle of this game translates from Japanese as 'Dance of Shadows'.

Finish a stage without throwing ANY star (only 'close attacks'). You can use your 'Dog Attack'. You will receive a 100,000 points bonus. 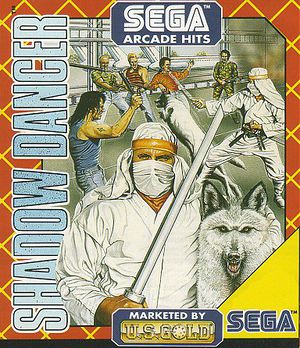 Box art for the U.S. Gold port of Shadow Dancer.