The year is 1999. Television has adapted to the more violent nature of man. The most popular form of television remains the game show. One show in particular has dominated the ratings. That show is SMASH TV.The most violent game show of all time. Two lucky contestants compete for cash and prizes. Each contestant is armed with an assortment of powerful weapons and sent into a closed arena. The action takes place in front of a studio audience and is broadcast live via satellite around the world. Be prepared. The future is now. You are the next lucky contestant!

A superb sequel to 1982's legendary single screen shoot-em-up, "Robotron - 2084". The Classic Robotron game-play is enhanced further with the addition of power-ups and imaginative and challenging end-of-level bosses. The two-player game introduced a very high level of competitiveness as both players try to beat each other to the power-ups, prizes and keys.

The game seems to be based, at least in part, on the sci-fi action movie, 'The Running Man', starring Arnold Schwarzenegger. The film itself was based on a book of the same name by Stephen King (under the pseudonym 'Richard Bachman').

One of Smash TV's more memorable elements was the game show host; at random intervals, a garishly suited, grinning host would pop up and enthusiastically announce such memorable sound-bites as, 'Total carnage! I love it!', 'I'll buy that for a dollar!' (taken from the 1987 movie RoboCop), 'I love it!', 'Big money! Big prizes! I love it!'.

A Smash T.V. sequel was planned, but the project never got past the planning stage and nothing more was heard of it. While Smash TV has yet to see a fully-fledged sequel, it WAS followed by a semi-sequel in the form of 'Total Carnage'; a military-themed scrolling shoot-em-up which was housed in a cabinet very similar to that of Smash T.V.s and shared the same dual joystick controls. Upon completion of Total Carnage's incredibly difficult first level, a message screen appeared stating that "all Smash T.V. players should quit and flee from this machine" before Total Carnage's already high difficulty level increased further. A solid follow-up to an already challenging game.

On the 2005 video game "Grand Theft Auto - Liberty City Stories", there is a side-mission called 'Slash TV', which parodies this game, where the player's character is surrounded by enemies, and is awarded cash for eliminating waves of them. The camera angle changes from the game's traditional third-person to a slightly angled overhead view so it looks like the original.

(Works on 5.00 and Up) When you start a game of Smash T.V. on the first level, reset the machine, it'll take you to the 'Secret Warp 3' and take you to the third boss stages.

The game is known to adjust its difficulty by the daily high score list. If the high scores are too high, making the game too hard, just reset the machine :).

Don't try to conserve ammo. Your shots should be efficient and kill as much as possible, and you won't have time to think about conserving shots (especially in the latter stages). The pattern of moves you should follow at the end of each board to reach the easiest boards is :

When playing with 2 people, if one player finishes the level near an exit, the other will 'walk through the wall' to the next room. Can be useful on some levels. 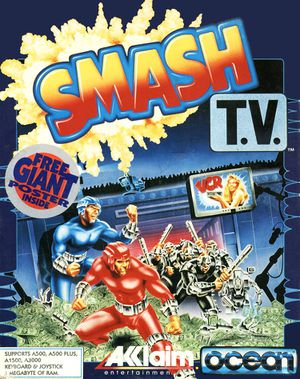 Box art for the Ocean port of Smash T.V.