A pseudo-sequel to Williams' superb 1990 shoot-em-up, "Smash T.V.", Total Carnage is set in a futuristic parody of the first Gulf War. General Ahkboob, himself an obvious parody of Saddam Hussein, has set his vast army of infantry, tanks and BioGenetic Mutants onto the world.

1 or 2 players must fight through the enemy-packed levels, rescuing reporters and civilians as they go. Total Carnage retains the dual-joystick control of its predecessor, but introduced new weapons, enemies and large, scrolling levels to the original game-play.

As with "Smash T.V.", Total Carnage features the infamous 'Pleasuredome'; accessible only if players manage to collect the 220 keys that are hidden throughout the game's levels. Total Carnage has a much higher difficulty level than that of "Smash T.V.".

General Akhboob's role as a parody of Saddam Hussein becomes obvious during the game's cut-scenes; as well as him saying slogans from "Smash T.V.", he makes an obvious reference to the original Gulf War by announcing that 'all we are making is baby milk.'.

Enter the password on the 'red and white' warp at the beginning of the first mission. 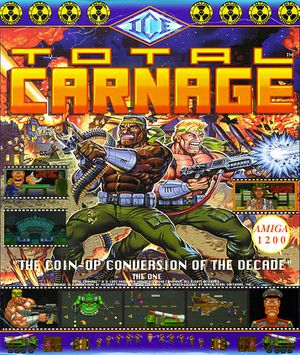