The Play Mode begins in outer space with the Death Star off in the distance. The Red 5 X-Wing aiming device (cursor) appears as a cross-hair on the screen. As the flight control is moved in any direction, the four laser guns move accordingly. Firing the laser guns will cause alternating laser beams to fire from the guns toward the cursor. In this mode, R2-D2 is controlling the flight pattern of the X-Wing based on the flight of attacking T.I.E. Fighters.

Your goal is to blast any and all T.I.E. Fighters and their oncoming shots. If you are hit, your deflector shield will automatically turn on and dissipate the energy from the shot, causing a very bright light to flash on the screen. You will experience a roll in space due to the impact. In a while, the T.I.E. Fighters will turn away from you and fly back to the Death Star.

Surface Of The Death Star

In the next phase of the Play Mode, the X-Wing flies directly toward the Death Star, engines roaring, to a surface covered with hostile laser bunkers and laser towers. Now you, not R2-D2, control the X-Wing. Your goal in this phase is to reach the trench. To do this you must avoid or eliminate (by shooting) the structures and the shots fired by them.

The laser tower tops have a progressive scoring incentive that is displayed in a message in the top centre of the screen, along with the number of remaining laser tower tops to be destroyed before the X-Wing dips into the trench. Eliminating all laser tower tops awards you an added bonus.

Getting hit by a shot or smashing into a laser tower top or laser bunker will roll the X-Wing to the right or left as the deflector shield automatically turns on and absorbs impact, displaying a very bright screen. Each collision costs you one deflector shield.

In The Trench Of The Death Star

Once you have travelled the required distance over the Death Star surface, the X-Wing dips down into the long, deadly trench. In this phase, you can fly right, left, up, or down; but you remain within the trench.

Your main goal while in the trench is to destroy the Death Star by shooting the exhaust port at the end of the trench. You can survive the trench by flying around catwalks, which stretch across the trench at various altitudes, and by avoiding or shooting shots fired from the red laser-gun turrets on the walls. Deflector shield energy is lost if a shot hits you or if you smash into a catwalk. If you successfully reach and shoot the exhaust port, the RED 5 X-Wing will soar away from the Death Star and then turn toward it to watch it blow up.

If you miss the exhaust port, you will crash through the back wall and R2-D2 will show his displeasure with you. The X-Wing will remain in the trench until the Death Star is destroyed or you run out of deflector shields.

Upon destroying the Death Star, the X-Wing returns to another war in the stars with smarter T.I.E. Fighters from a more advanced Death Star. Your ability as a Jedi Warrior will be challenged even more with the destruction of each successive Death Star.

The basic game engine for Star Wars was converted from a 2-year old space game project called 'Warp-Speed', which was designed to develop 3-D image capabilities. The controls were adapted from the controls used for Army "Battlezone".

Star Wars was the first Atari game to have speech. The game featured several synthesized voices from the film. The most memorable was the voice of Obi-Wan Kenobi, after losing the game, stating 'The force will be with you--always'.

A sequel was planned as 'Star Wars II' the same year (idea form only) with a serial communication concept (link between 2 or more cabinets) - this idea never was born.

The default high score screen of "Cyberball 2072" features names of many Atari arcade games, including STARWARS.

A Star Wars [Upright model] appears in the 1984 movie 'Gremlins'. 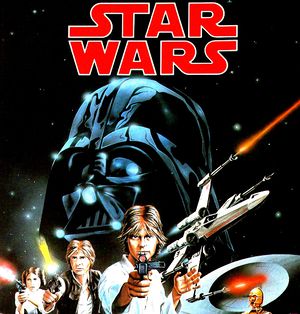 Box art for the DoMark port of Star Wars.