Volfied is an arcade video game.

An update of Taito's 1981 classic, "Qix", Volfied adopts the same 'draw boxes to colour in the background' game-play of its predecessor but updates both the graphics and in-game enemies. A number of power-ups are available, revealed when certain sections of the background have been filled, such as Speed-up, temporary enemy freeze and laser. The player's ship is only in danger from the game's enemies while the player is actually drawing a line. Each level must be completed within a tight time limit. 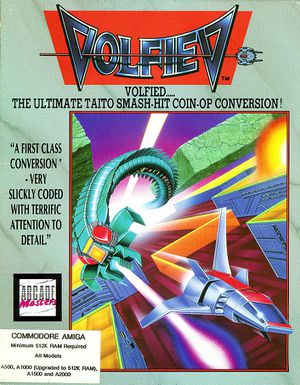 Box art for the Empire Software port of Volfied.