After Burner and its immediate sequel After Burner II are chase-view, arcade video game shoot-em-ups.

Another Sega game rendered with their then-ubiquitous 3-D sprite-scaling technology; this time putting the player into the seat of a powerful F14 Tomcat jet fighter.

Players must fight their way through 21 colourful, fast-moving stages, shooting down waves of enemy fighters while avoiding the enemy's incoming missiles. The F14 is equipped with a machine gun and a limited number of homing missiles. The gun has infinite ammunition and targeting is achieved by maneuvering the Tomcat so that the targeting cursor situated just in front of the jet is placed over an enemy fighter.

To deploy missiles, the player must first 'lock-on' to the target, a sound will indicate that the lock has taken place and missiles should then be fired, these will home in on and destroy the locked-on enemy fighter.

Missile stocks are replenished at the end of every 2nd stage, either by the appearance of a large support plane that automatically links up with the player's jet fighter, or by landing on a military airstrip - which again happens automatically.

After Burner's straightforward shoot-em-up gameplay is simple and repetitive, but the game's incredible visuals ensured its success.

After Burner II was originally planned to have a World War II theme and be a realistic flight sim, but the idea was dropped because Yu Suzuki stated that 'it would not have fit the arcade scene.' A pure dogfighter was not his intention.

After Burner II is essentially the same game as "After Burner", but there are a few differences, mainly the fact that it is possible to control your plane speed.

In the cut-scenes that show your jet fighter landing on a landing strip in order to reload the missile supply, there are some special vehicles that will make a cameo appearance. In the first landing, you'll see a man riding the motorcycle from "Hang-On". and in the second landing, you'll see the famous Ferrari Testarossa-like car from "Out Run".

An After Burner II unit appears in the 1991 movie 'Terminator 2 - Judgment Day'. 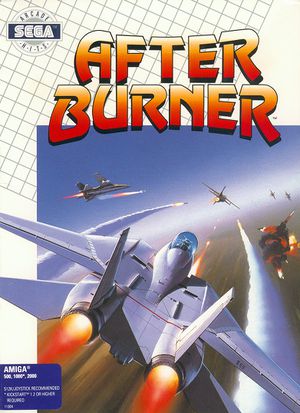 Box art for Sega's own port of After Burner.

As well the attract mode images further below, the original arcade version had an impressive vector ball sequence which showed a rotating Roman numeral I which is then hit by missiles and explodes off-screen and implodes back into a Roman numeral II. This eventually rotates into place behind the After Burner logo which is also rotating! 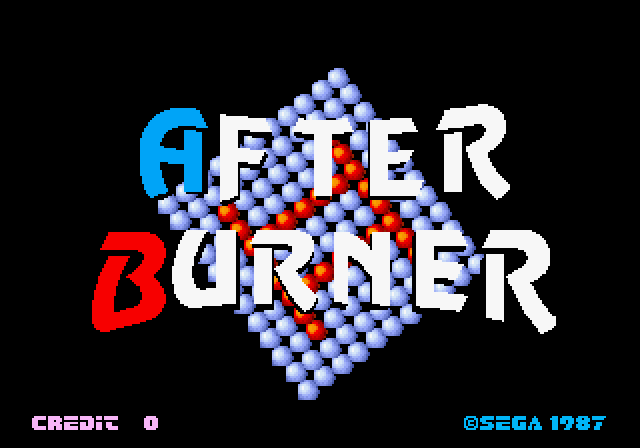 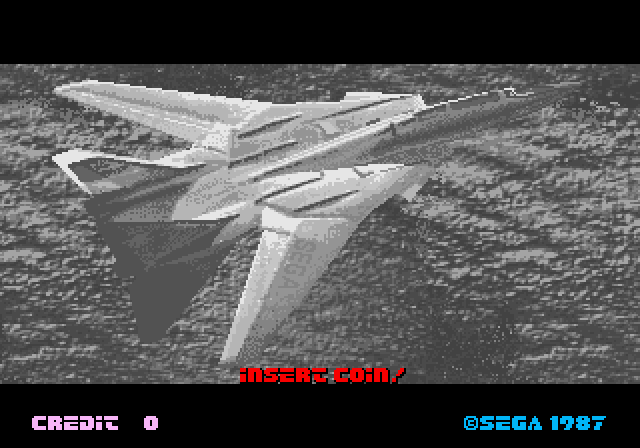 The game begins by zooming into an aircraft carrier launch deck with your jet on board. Your jet then launches into the air and straight into Stage 1. Forget about blinking from this point onwards! 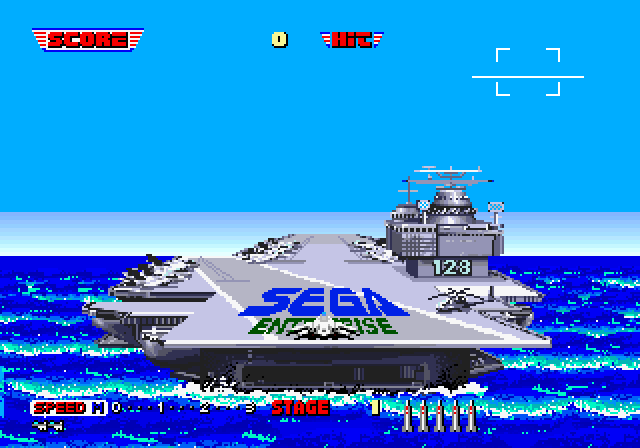 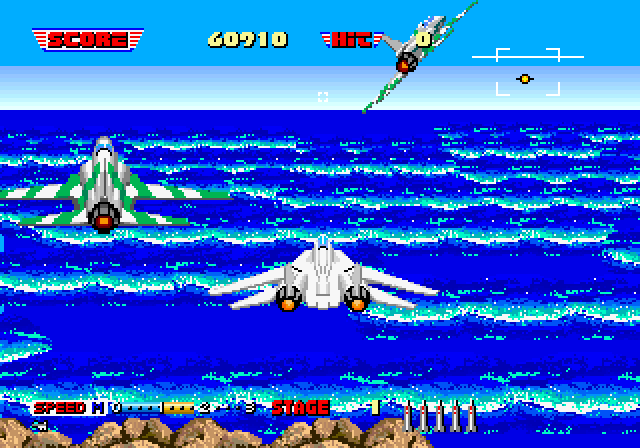 The aerial reload of ammunition was an automated section that gave you a few seconds to regain your eyesight before the next Stage! 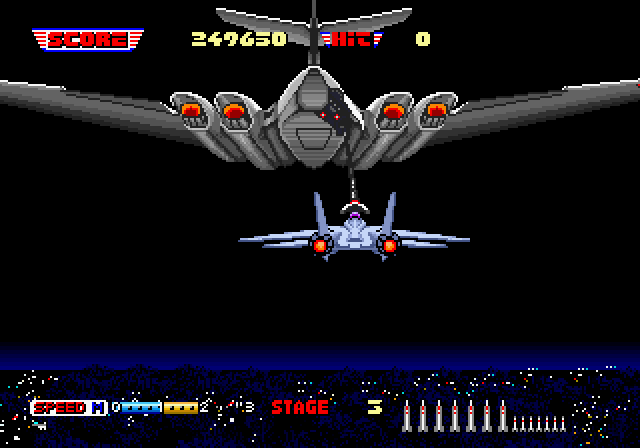 A bonus animation that didn't exist in the first version of the game which features two refuelling landing strips to give your poor eyesight another well-earned break. During these sections, you are visited by the Hang-On motorcyclist on his bike and the Our Run Ferrari. 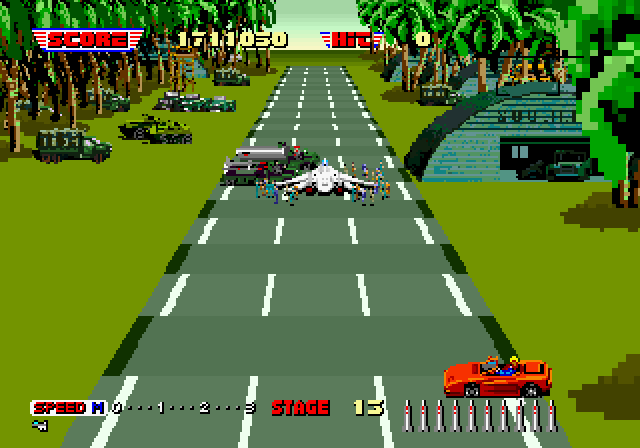 There are two canyon sections, which represent the only time you can interact with the landscape. Whilst you navigate your way through, there are also targets to fire at. 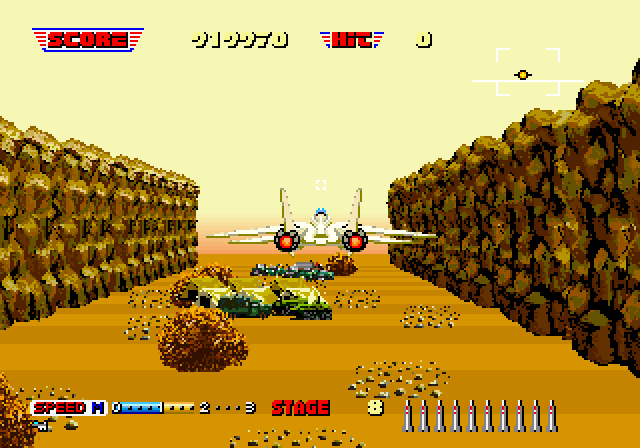 On completion of Stage 22, the next area is the end sequence where you automatically fly back to the aircraft carrier and land back on the launch deck. 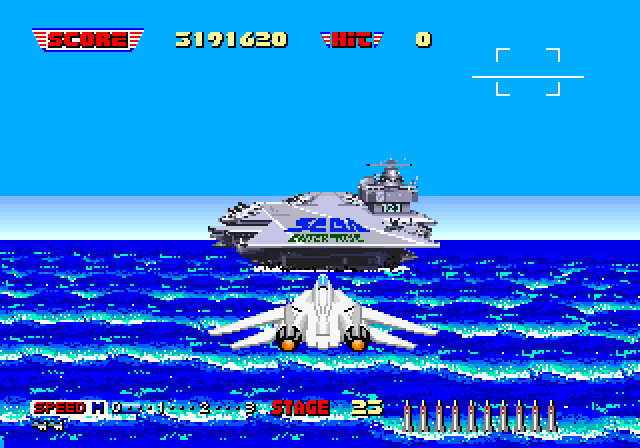 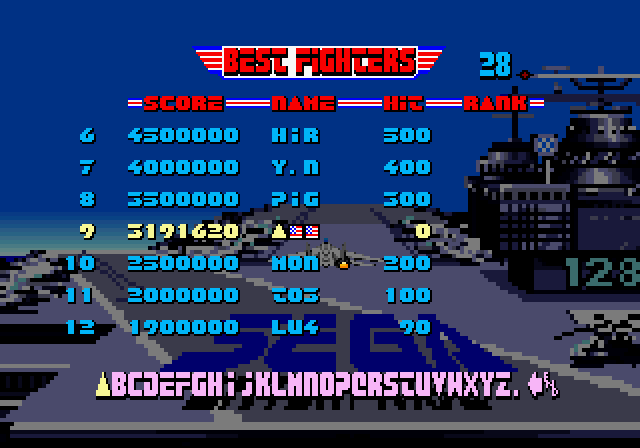