A barbarian hero jumps and fights his way through a variety of colourful, enemy-packed levels in this spiritual successor to the Capcom classic "Ghost 'n' Goblins". The sprawling, eight-way scrolling levels are packed with hidden bonuses to encourage and reward exploration. Most of these bonuses are in the form of 'Zeny coins'; currency that allows the player to buy such items as an upgrade to their weapons and armour, keys for treasure chests, and anti-poisoning potions. Special items that reveal coins, upgraded armour, or simply bonus points may be found by attacking certain walls.

This game is known in Japan as "Black Dragon".

A bootleg of this game was released by Dragon as the same name.

The game features several hidden bonuses. Some of them are cameos from other Capcom games : The barrel from "Higemaru - Pirate Ship", the robot hero from "Side Arms - Hyper Dyne", the dragonfly and the bamboo shoot from "Son Son".

You also will receive a Zenny bonus after completing a round, the bonuses are :

You get the Blue Demon Warrior on Round 5 and the Red one on Round 7.

You only encounter this boss on Round 4.

You will start the game at Round 1 (unless you are continuing). You will be given 200 Zenny, two-hit armor, and a basic weapon. In addition, each round is timed so you will not only have to beat your enemies, you will also have to beat the clock. You will have 1:59 to complete each round. If you fail, then you lose a man and the clock resets again. All dungeons exit at the same exact point you entered them from. There are also secrets buried in the walls. Some give money, others give weapon or armor bonuses.

This is your introduction to this world. The monsters are relatively easy to defeat and the round is pretty straightforward.

You will cross over several pits with spikes in them. Follow the path to the end. Talk to sage then climb up the spine. SECRET : Break wall on your climb to claim 800 Zenny. 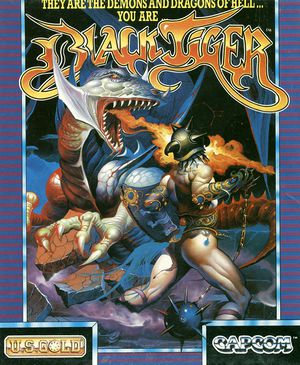 Box art for the U.S. Gold port of Black Tiger.