Chase H.Q. is a chase-view, driving arcade video game where the player takes on the role off an undercover cop and gets behind the wheel of a custom Porsche in this Miami Vice-inspired racer from Taito. The player has 60 seconds to catch up to the criminal and then a further 60 seconds to ram his car until it is too damaged to drive.

Like Sega's seminal "Out Run", Chase H.Q. features forked junctions offering players a choice of routes; in this game, however, the route selected is merely a temporary diversion and dictates how quickly the criminal is caught up with. The player's Porsche is equipped with a limited number of turbo boosts which, when used, push the car to incredible speeds - at the expense of control. The turbos must be used wisely if the player is to have a chance of capturing the criminal before the time limit expires.

The names main characters of chase H.Q. are as follows...

The main player's car (the black Porsche) makes an appearance in the spin-off to the Chase H.Q. series : "Crime City". 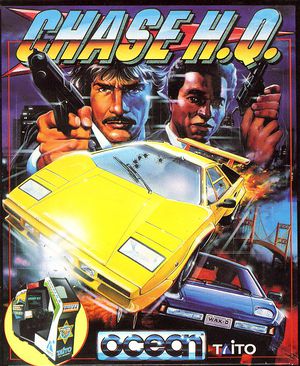 Box art for the Ocean port of Chase H.Q.