A direct sequel to 1988's "Chase H.Q.", S.C.I. once again puts the player in charge of an unmarked police car - this time a Nissan 300ZX T-Top Turbo - in which the player must chase and capture a criminal mastermind before the time limit expires. Graphically, S.C.I. is very similar to its predecessor, although there are slight improvements with both a better use of colour and the introduction of some new weather effects; such as the rain on the first stage. Unlike the first game, the player is armed with a gun; this is used to take out criminals and roadblocks as the player races against the time limit, and also to capture the criminal mastermind and make an arrest before the time limit expires.

The car that you drive is a Nissan 300ZX T-Top Turbo.

A little known trick (or is it a very generous bug?) to this game: Start a new game, and accelerate VERY slowly until your score reaches 90. Now STOP and just let the time run out. Once your game ends, don't continue, just let the timer run down. Once that happens, you'll notice that your score will SKY-ROCKET to the ridiculous amount of 76,543,210. Now go ahead and claim your top spot on the hi-score table (cheater!@#). 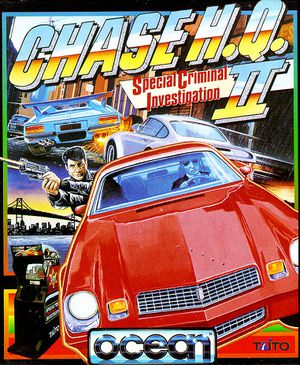 Box art for the Ocean port of Special Criminal Investigation.