E-SWAT Cyber Police - The Ultimate Factor in the Battle Against Crime is an arcade video game.

The player takes on the role of a rookie cop in this sideways scrolling platform shoot-em-up from Sega. A powerful crime syndicate is creating chaos in the cop's home city and he must prove his ability as a police officer by capturing a number of crime bosses, killing as many of their henchmen as possible in the process. The policeman carries a standard issue pistol which only has a limited amount of ammunition. In the event of the ammunition running out, players will only be able to kick their enemies. Extra Ammo can be picked up at various points in the levels.

As the player progresses through the game and makes more and more arrests, their on-screen character will be promoted through the ranks. First to Captain, then Assistant Chief, Chief and finally, once three crime bosses have been arrested, to a full E-SWAT agent. Adorning full, robot-style body armour that bears more than a passing resemblance to the "RoboCop" character from the games and movies of the same name. In armoured mode, the cop has vastly increased firepower, including a limited number of bombs that are ejected by a mechanical device on the policeman's back.

As the armoured cop is shot, his armour will gradually disappear until he is finally killed.

E-Swat plays very much like a cross between Sega's own 1987 classic "Shinobi", as well as Namco's superb "Rolling Thunder".

SWAT is an acronym for 'Special Weapons And Tactics'.

When facing the second boss (the tall, boomerang-throwing thug) simply shoot repeatedly until you run out of bullets, then get in really close and 'kick' him for a one-hit win. 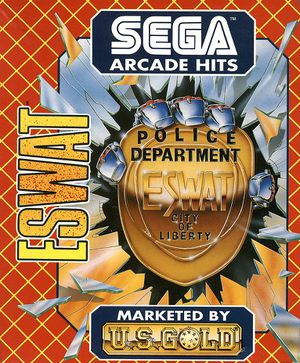 Box art for the U.S. Gold port of ESWAT.