Mortal Kombat II is a one-on-one fighting arcade video game where 12 digitized fighters battle to stop Shao Khan and Kintaro from dominating the Earth realm! Regarded as the best of the series.

Released in November 1993. This game was the first Midway release to use the DCS Sound System.

'Noob Saibot' backwards spells 'Boon' and 'Tobias' who are the names of the principal game designers.

'Jax' was originally supposed to be in the original "Mortal Kombat" game and named Kurtis Stryker. Jax was then moved to MKII and the Stryker character debuted in "Mortal Kombat 3".

'Kintaro' was originally intended to be a humanoid tiger, similar to the creature in Japanese mythology. This idea was scrapped, however, due to the fact that creating the costume would not have been feasable. However, thanks to this original idea, the Shokan we know as Kintaro has the tiger stripes on his back.

Real life : Philip Ahn, who played the regenerated Shang Tsung, is in fact a doctor.

Three of the cast members for MK2 filed a lawsuit against Midway shortly after the game was released. The claim? The physical instructors/martial artists Elizabeth Malecki (Sonya Blade), Catalin Zamiar (Kitana/Milenna) and Philip Ahn were under the impression that they were hired under typical acting contracts and were entitled to a small modicum of benefits including royalties of title sales, etc. The plaintiffs banded together against Midway, who took the case to court. Eventually the judge failed on Midway's behalf, citing that the work done by the plaintiffs for Midway was done strictly as a 'work-for-hire' and Midway owned all the property and benefits on the characters/titles/etc. As a consequence, all three left the project, and were recast for "Mortal Kombat 3".

Both games were supposed to be released within weeks of each other (at this time, "Street Fighter" and "Mortal Kombat" were the dominant fighting games). Capcom released "Super Street Fighter II - The New Challengers" early so that they could attract fans away from MK. At the same time, Midway released MK2 early for similar reasons. As you can see, the result meant that both came back to square one.

(See 'Tips And Tricks' section for more info) in MKII were used in making light of the violence controversy in the first "Mortal Kombat" game.

Two non-existent hidden characters were 'Torch', and 'Hornbuckle'. In MKII there is a location called 'The Pit II'. Far in the background of this stage there is another bridge across the chasm. Standing stationary on this bridge are two fighters : one of them is a Liu Kang sprite with green pants who was named Hornbuckle by fans. One of Jade's hints was 'Hornbuckle who?', which people thought was the name of a hidden fighter, and was apparently given to the guy opposite 'Torch' on The Pit II. If you watch the ending credits, one of the programmers' last names is Hornbuckle. The other fighter is a humanoid character that seems to be made of fire. As these two characters never move, it has been suggested that the 'other fighter' is actually a funeral pyre. Finally, there is a cloaked figure who floats in front of the window during fights in The Tower and Portal stages in MKII. This character was dubbed Cloak by fans, and was assumed to be a hidden character. The character of Torch, who had been very popular with fans, eventually showed up as a playable character in "Mortal Kombat : Deadly Alliance". Unfortunately, due to trademark issues, he had to be called Blaze instead of Torch. The true identity of Cloak was revealed in "Mortal Kombat : Shaolin Monks" to be one of Shang Tsung's servants, a shadow priest.

The head that occasionally appears after an uppercut and says 'Toasty' is the digitized head of Dan Forden who worked on the sound and music for the game.

Jimmy Cardenas holds the official record for this game with 282,000 points.

Not confirmed yet but still possible for REV. 4.2 or above

REPTILE
(jump distance) Back(x2), Down, LP - Reptile shoots his tongue towards the victims head, bringing it back where he goes about eating it.
(you must be invisible - close) Forward(x2), Down, HK - While invisible Reptile cuts the torso off the victim.

SUB ZERO
(far) hold LP, Back(x2), Down, Forward, release LP.
(one step distance) Forward(x2), Down, HK - Sub-Zero will ice the victim over, putting them in a deep freeze.

After deep freezing the victim, press Forward, Down, Forward(x2), HP - Sub-Zero will shatter the top part of the body.

SCORPION
(two step distance) hold Block, Up(x2), release Block, HP - Scorpion removes his mask and breathes fire at the feet of the victim, which then twitches and explodes.
(anywere) hold Block, Down(x2), Up(x2), release Block, HP - With the addition of the two downs at the beginning, Scorpion may do the fatality at any distance, and always get the "Toasty!".
(close) hold HP, Down, Forward(x3), release HP - Scorpion slices the victim across the neck then cuts them in two.

JOHNNY CAGE
(close) Down(x2), Forward(x2), LP - Cage grabs the victim and rips their torso off, throwing it to the ground.
(close) Forward(x2), Down, Up. Cage crouches and punches off the head of the victim with a powerful uppercut.

To knock off three heads, hold Down+LP+HK+Block until the first head is knocked off.

KUNG LAO
(one step Distance) Forward(x3), LK - Kung Lao removes his razor hat and slices the victim down the middle.
(far) hold LP, Back(x2), Forward, release LP, Up - Kung Lao throws his hat which decapitates the victim. Make sure to guide the hat up so it hits the head.

RAIDEN
(close) hold LK for 3 seconds and release - Raiden grabs the victim and lifts them up, then proceeds to shock them.

After a dose of the shock treatment, press Block+LK repeatedly - The victim will explode into bits.

(close) hold HP (soon before the 'Finish Him') for 5 seconds and release - Raiden explodes the top half of the victim with a powerful uppercut. A few moments later the head falls to the ground.

JAX
(close) hold LP, Forward(x3), release LP - Jax claps the victims head with a loud pop, and the skull crumbles in pieces to the ground.
(one step distance) Block(x4), LP - Jax grabs the victim by the arms and rips them off the body.

LIU KANG
(close or one step distance) hold Block, 360 degrees - Liu Kang will do a cartwheel kick then a massive uppercut.
(close) Down, Forward, Back(x2), HK - Liu Kang will transform into a dragon and bite the victim in half, leaving the legs standing.

KITANA
(close) Block(x3), HK - Kitana draws her fan and decapitates the victim with one swipe.
(close) hold LK, Forward(x2), Down, Forward, release LK - Kitana leans and kisses the victim, which then expands to unnatural proportions and explodes.

MILEENA
(close) hold HK for 2 seconds and release - Mileena removes her mask revealing Baraka-like teeth and inhales the victim, spitting out the bones.
(close) Forward, Back, Forward, LP - Mileena repeatedly stabs the victim, lifting them up as blood sprays everywhere.

SHANG TSUNG
(one step distance) hold HK for 4 seconds and release - Tsung turns into a mist and enters the victims body, which explodes.
(close) hold Block, Up, Down, Up, release Block, LK - Tsung picks up the victim with one hand, and drains their life force into his other hand.
(one step Distance) hold LP at the round start and release it 3 seconds after the 'Finish him' - Tsung turns into Kintaro, who punches the torso of the victim across the screen.

Hold Player1 and Player2 Down at the end of the fatality to send the character in the spikes.

Don't use LP and HP during the last round:

Don't use LP and HP during the last round: 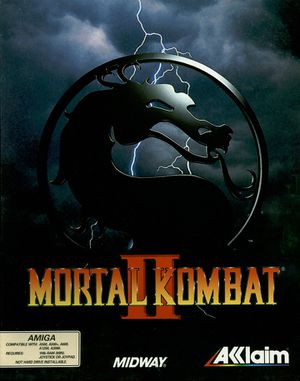 Box art for the Acclaim port of Mortal Kombat II.