Mortal Kombat is a one-on-one fighting arcade video game featuring a cast of 7 different fighters. Mortal Kombat took ideas from Capcom's seminal "Street Fighter II - The World Warrior", such as the game's special moves and projectiles. It also introduced a cast of photo-realistic digitized fighters for players to fight either as or against.

Battles are fought over the best of 3 rounds. At the end of a round a voice instructs the winner to 'finish him' and players have only a couple of seconds to try and execute their character's 'fatality', which sees the winner killing the loser in a spectacular and grisly fashion.

Although Pit-Fighter was released in 1990, Mortal Kombat is more remembered as the first fighting game to use digitized characters and blood (as opposed to the hand-animated, more cartoon-like graphics of competing games). Mortal Kombat was developed as a reaction to the popular Capcom game "Street Fighter II - The World Warrior", with simpler controls and digitized graphics. Some say the game's graphic violence was gratuitous, and was only included in order to generate a public outcry and controversy that would increase publicity for the game.

Although highly controversial, the mix of realism and violence propelled Mortal Kombat to the height of popularity. An example of the game's innovations was the Fatality, a special finishing move executed against a dying opponent to create an even more gruesome death. For example, one character would grasp a defeated, wobbling opponent by the head, then rip the head and spine out of the opponent's body, which then crumpled to the ground in a pool of blood. Another aspect of game-play that became a recurring element in games that followed was the so-called 'juggle', where a series of moves could be executed against an opponent who was kept in mid-air by the force of the attacks, and who hence had no defense against further attacks as long as the 'juggle' could be maintained.

The original concept of Mortal Kombat was modeled after the Jean-Claude Van Damme movie 'Bloodsport', which is a cult classic martial arts film. The character of Johnny Cage is directly modeled after Frank Dux, Van Damme's character in the movie. Johnny Cage's film-star motif is an obvious link to this. Cage also wears the same costume (plus shoes) that Van Damme's character wore in the final battle of the movie. Cage's splits punch was originally seen in Bloodsport during the fight against the Sumo wrestler. Since Midway was unable to get Van Damme for this game, they kept the same kumite/martial arts movie concept and added the Kombat story.

Mortal Kombat was the first video game to have an official release date countdown in U.S./U.K. and Australia. This momentous day was known as 'Mortal Monday'.

The code for this game includes the ASCII string 'NOOBSAIBOT' (originally in "Mortal Kombat II" rev. 3.1), suggesting that the character may have made his first appearance here, instead of Reptile (which took up less memory).

During the fighting scenes that take place on the stone platform above the field of sharp spikes, if you look closely at the glowing moon in the background, you will sometimes see a silhouette fly past it. These shadows will either be Peter Pan and the Darling children, a witch on a broomstick, a kite, a blimp, a rocket, a flying saucer, or Santa Claus in his reindeer-pulled sleigh. The shadows appear about every 6 games.

Raiden really is the Japanese God of Thunder. His appearance in myth is quite different though : he has red skin and a demonic face, his feet have two claws on them, and he carries either a wheel or drums on his back. He also is thought to eat human navels so people are advised to lie on their stomachs during storms.

In the Courtyard stage, above the red door on the right side, you can see "Pac-Man", a ghost and a power pellet carved on the stone.

A Mortal Kombat unit appears in the 1995 movie 'The Doom Generation'.

A bootleg version of Mortal Kombat exists, where the name of the manufacturer is YAWDIM - that's MIDWAY reversed!

A hacked version also exist, every stage had a black/night sky and every time you got frozen by Sub-Zero, your fighter would rise up and stay there 'till you either got hit or the freezing effect went away. The same thing would happen if you were using Sub-Zero and froze your opponent. The machine would boot up just like a regular MK machine boots up, except another black screen with red letters and asterisks labeling it as "Mortal Kombat Black Ninja Edition" was displayed before the title screen.

To perform a Fatality, you must win the match, then do the proper joystick/button sequence when 'Finish Him!' appears: -

Johnny Cage
(close) Forward(x3), HP - Cage decapitates his opponent with an uppercut.
Kano
(close) Back, Down, Forward, LP - Kano rips out his opponent's heart.
Sub-Zero
(close) Forward, Down, Forward, HP - Sub-Zero grabs his opponent by the neck and pulls their head off, taking their spine along with the head.
Sonya Blade
(anywhere) Forward(x2), Back(x2), Block - Sonya blows an energy ball in the air. The ball hits her opponent and engulfs them in flames, turning the opponent into a skeleton.
Raiden
(close) Forward, Back(x3), HP - Raiden shoots lightning into his opponent's head, causing it to explode.
Liu Kang
(close) hold Block, 270 degrees (Forward, Down, Back, Up) - Liu Kang does a spinning kick and an uppercut.
Scorpion
(jump distance) hold Block, Up(x2), release Block - Scorpion removes his mask to reveal a skull. He then breathes fire on his opponent, turning him into a skeleton.

(Rev 3.0+ only) : The shadows indicate that Reptile is available as an opponent. To fight him, win with a double flawless and fatality, without using block in the entire match. 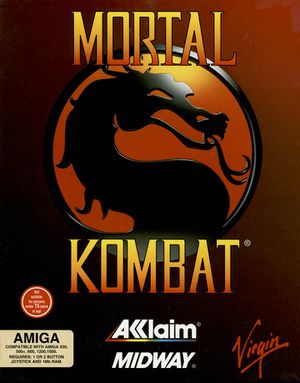 Box art for the Virgin Interactive port of Mortal Kombat.