Three digitized brawlers face off co-operatively against a variety of street thugs, with game-play featuring crowd interference and usable weapons. Players also get to fight each other in a 'Grudge Match'. Pit-Fighter featured impressive camera zoom and side-to-side pan but was somewhat flawed as a game-play experience. On the dedicated cabinet version, up to three players can play simultaneously.

Released in September 1990. This was the first ever beat-em-up to feature fully digitized protagonists - released two years before Midway's Mortal Kombat.

Pit-Fighter was available in both dedicated cabinets and as conversion kits. The converted versions were usually only housed in two-player cabinets, while the dedicated machine supported up to three players. The dedicated versions had 25" arcade monitors but, due to the lack of commercial and critical success, many of these machines were turned into "Street Fighter 2 - The World Warriors" before they were even a year old. 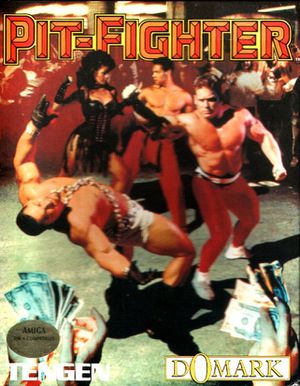 Box art for the DoMark port of Pit-Fighter.