The third sequel to Taito's seminal "Space Invaders", Super Space Invaders '91 leaves the classic Invaders game-play intact, but adds a slew of new alien invaders and power-ups to the mix. This, together with the vastly improved graphics that introduce colourful new backdrops - some of which scroll vertically in a similar fashion to the star-field in Namco's "Galaxian" - ensure that SSI 91 is a worthy sequel to the legendary original.

The original game's flying saucer still makes an appearance, but instead of merely awarding bonus points when shot - as in the original game - it now drops a power-up pod for the player to retrieve. Power-ups include shield, faster shots, a laser (activated with the second button) and a giant butterfly, which freezes the invaders for a limited time.

One of the game's most memorable features was the 'Cattle Mutilation' bonus screen, in which the player must protect a heard of cattle from a number of fast-moving saucers, intent on stealing the animals. If a cow is snatched; the player must shoot the relevant saucer to free it; being careful not to actually shoot the cow itself. The '91 incarnation also introduced 'bosses' to the series for the first time; giant, screen-filling aliens that required several shots to kill.

Another major difference to the previous games in the series is that if an invader reaches the bottom of the screen, the player will simply lose a ship (in the original, the game would end once an alien had landed). Also, the player's ship now comes equipped with a shield that can withstand several hits. The shield's strength is depleted every time it takes a direct hit from one of the invaders, and too many hits will result in the shield disappearing altogether. A direct hit on an un-shielded ship will result in the loss of a player life.

This game is known in Japan as "Majestic Twelve - The Space Invaders Part IV".

This game was dedicated to Katsujiro Fujimoto. 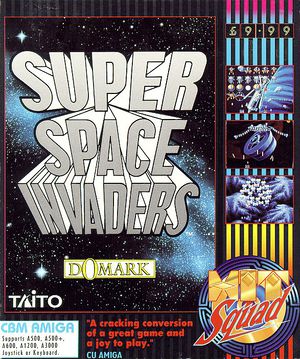 Box art for the DoMark port of Super Space Invaders '91.