Two jet-pack wearing marines must battle a powerful enemy force that has seized and inhabited their home planet - now known as 'Dust World' - and restore the planet to its former name of 'Earth'. Forgotten Worlds is the third and final game in Capcom's 'Jet-Pack Hero' trilogy (with the first two games being 1985's "Section Z" and 1986's "Side Arms - Hyper Dyne") and, as with the first two games, is a one or two player sideways scrolling shoot-em-up.

Forgotten Worlds' gameplay features multi-directional shooting, with the Marines being able to rotate through 360 degrees, allowing players to fire in any direction. When killed, enemies drop 'Zenny Coins' which can be used to upgrade weapons and player health at the shops that appear at the halfway point of each level. Forgotten Worlds features superb graphics and ingenious enemy design, and was converted to many different home formats.

This game is known in Japan as "Lost Worlds".

While Forgotten Worlds isn't a sequel to "Black Tiger", it does share similarities with it: In both games the player fights dragons, and also collects 'ZENNY' coins, money to buy weapons and armour in shops. Also, both games feature intros depicting dragons attacking cities.

The first player character, Unknown Soldier, appears as an assist character in "Marvel vs. Capcom - Clash of Super Heroes". The second player character appears in "Final Fight" as an enemy member of the Mad Gear gang; he was then called 'Two P' (for 2P, 'player 2').

The shop music used in this game was later remade and used as the shop music for "SNK vs. Capcom - Card Fighters Clash". 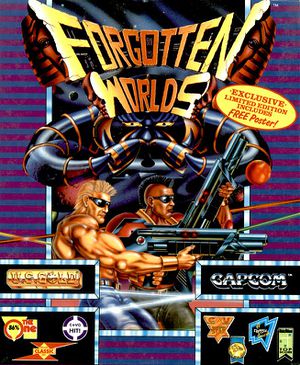